Tahir hopes to come back stronger next year; we did not play as team, says Hossain - GulfToday 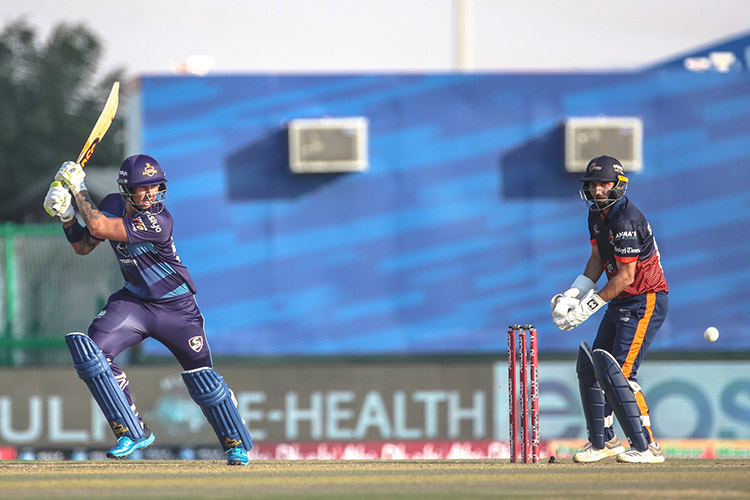 Action from the match between Deccan Gladiators and Maratha Arabians during their Abu Dhabi T10 match.

Despite their 29-run victory against Maratha Arabians, Gladiators had to bow out of the Abu Dhabi T10, after failing to make it to the play-offs.

Gladiators finished third from the bottom in the eight-team league with just four points from two wins and four losses.

“Obviously, this is not how we wanted to finish the campaign.

Hopefully we will come back stronger next year,” said Tahir after the match.

The veteran Pakistan-born South African wily spinner also revealed the secret of his fitness, which defies his age.

“I believe if I keep working hard like, I want to play as long as I can. As long as I am enjoying may game, I will keep on playing. I have to work very hard to keep myself fit. I have to run around a lot and that is what I have been doing,” elaborated Tahir, who took one wicket, conceding 20 runs in his two overs.

“It is been a tough tournament for us, especially for us. I personally wanted to come and see how this format works. For me it is been a great challenge, especially when the ball is coming on to the bat nicely and there is so much dew around with cold weather.

“I think people do not realise that. As a team it has been a great experience. Obviously, we did not want to finish on this note but that is that. We worked hard, we respect each other tried our best but that is something not in our hands,” added Tahir.

Anwar Ali played a blitzkrieg cameo of 12-ball 39 to steer Gladiators to a fighting total of 120/4, before the bowlers got their act together to thwart Arabians to 91/3, despite a heroic 21-ball 44 by captain Mossadek Hossain.

“To be honest, as a team we did not play well. If you look at the other teams, they are all playing as unit, we did not play collectively as team,” said Hossain after the loss.