Bulls win to set up first qualifier against Warriors; Team AD to clash with Qalandars - GulfToday 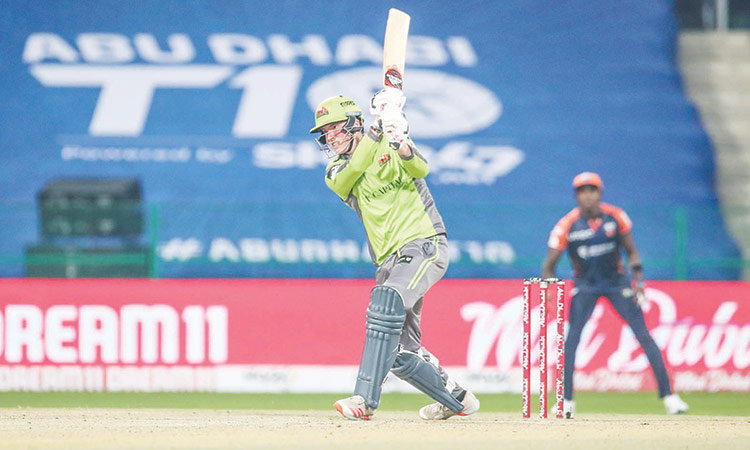 Action in a Super League match of the Abu Dhabi T10 tournament between Delhi Bulls and Qalandars at Zayed Cricket Stadium in Abu Dhabi on Thursday.

The win took Delhi Bulls soaring to the top of the T10 Super League table and saw them set up a first qualifier against Northern Warriors to be played this Friday.

Bulls restricted Qalandars’ to 107 for 6 before racing away to a morale-boosting win in the second match of the fourth day of the Super League.

Opener Lewis’ 48 came off just 18 balls with five sixes and three fours while Bopara remained unconquered on 37 off 15 balls with two sixes and five boundaries.

Earlier, Bulls won the toss and followed the trend of opting to field. Qalandars managed to put up a competitive 107 for the loss of 6 wickets with Tom Banton top-scoring with 26 off 20 balls before being run out. Qalandars’ other notable contributions came from Samit Patel (18 off 5), Chris Jordan (18 off 9) and skipper Sohail Akhtar (14 off 8).

Chasing the 108-run target, Bulls’ openers Gurbaz and Lewis could get only one run each from Tanvir’s first over. Gurbaz lifted UAE left-arm spinner Sultan Ahmed for a six to long-on and a boundary to mid-off. He also picked another straight six to take 16 runs off that over.

Lewis smashed the first ball of the third over for a four to long off and pulled the next one for a six. The third ball was also hit for a six. He was beaten by the fourth ball, but luckily the inside edge fetched Lewis another four. With the fifth ball, Daniyal trapped Gurbaz leg before for 17, but the over ended with Bulls getting 23 runs.

Ravi Bopara hit Jordan for a six to long-on to steer the team past the 50 run mark in 3.1 overs. Lewis did not spare the accurate Jordan too and hit him for a six to mid-off to take 16 runs off the over. Bopara sliced the first delivery from Mohammad Zahid past point for a boundary. At the half way mark, Bulls needed only 34 more runs.

Daniyal bowled a splendid sixth over, though Lewis pulled the last ball of that over for a six.  Bopara hit the first ball of the seventh over from Zahid for a boundary and followed up with a six to mid-wicket. He also smashed him for two more consecutive boundaries. When Lewis also hit Zahid for a six, 25 runs came off that over.

Bopara smashed Patel through the covers to inflict Qalandars their first loss.

Earlier, in the day’s first Super League match, defending champions Maratha Arabians bowed out of the tournament with another shoddy batting performance. They crashed to a 29-run defeat to Deccan Gladiators.

Anwar Ali’s blazing cameo of an unbeaten 39 off 12 balls with two sixes and six boundaries helped Gladiators post a total of 120 for 4. In reply, Arabians could muster only 91 for 3 despite their skipper Mosaddek Hossain’s unbeaten 44.

In the last match of the day, both Team Abu Dhabi and Bangla Tigers were vying for the last qualification slot of the playoffs.

The winners on the night, Team Abu Dhabi beat the Bangla Tigers by 21 runs to qualify for Friday’s 1st Eliminator where they will meet the Qalandars. Batting first, Team Abu Dhabi put up a challenging 116 for 3 to which Bangla Tigers could reply by putting only 95 runs on the board for the loss of 9 wickets.