Perfect ATP Cup take-off for Djokovic, Serbia; Nadal pulls out with sore back 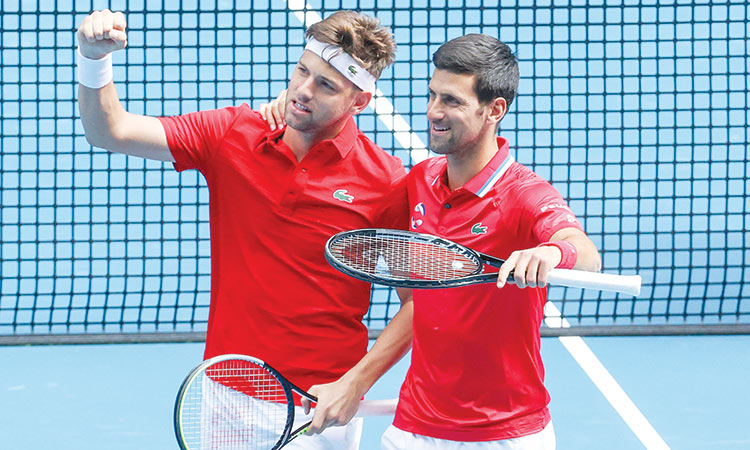 Australian Open champion Novak Djokovic got his season off to a perfect start with a battling 7-5, 7-5 win against hot shot Canadian Denis Shapovalov in the ATP Cup on Tuesday, but Rafael Nadal pulled out injured and world number three Dominic Thiem crashed to defeat.

The Serbian world number one will be chasing a ninth Australian Open crown when the year’s first Grand Slam begins on Monday.

“It was a great opening of the season. Playing Shapo is always a great challenge on hardcourts, he is such a dynamic, explosive player,” said Djokovic, who was fired up by playing in front of a smattering of noisy Serbian fans.

“I thought we both played on a pretty high level, so I’m really pleased with the way I started the season.

On a cool day, big-serving Raonic got Canada off to a blistering start, crushing Dusan Lajovic 6-3, 6-4 in 79 minutes to give his team a 1-0 lead.

It was left to Djokovic to level the tie before clinching the doubles rubber.

Nadal was due to face Australia’s Alex de Minaur in an evening Group B clash, but withdrew shortly beforehand with a back niggle.

“Hi all, we have decided with Team Spain and my team, to not play today the first match of the ATP Cup here in Melbourne since I have a stiff low back,” he tweeted.

Nadal, though, said he hoped to be fit by Thursday, when Spain meet Greece.

Meanwhile, US Open champion Thiem got his season off to a disappointing start, losing 6-2, 6-4 to Italian world number 10 Matteo Berrettini.

Russia won the day’s other tie against Argentina, with Daniil Medvedev and Andrey Rublev both posting wins.