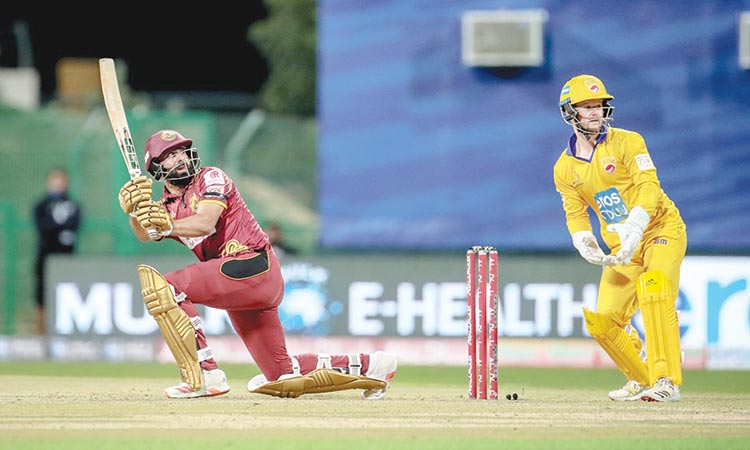 Abu Dhabi bowled tightly challenging Warriors to score 31 runs off the last two overs and 15 off the final over. Warriors reached the target off the last ball.

Northern Warriors won and elected to bat first. The match got off to a sensational start when Wahab Riaz clean bowled Paul Stirling with the first ball of the match through a swinging yorker. Undaunted by the early loss, skipper Luke Wright hit Riaz for two consecutive boundaries and a six in the same over.

Wright did not spare Junaid Siddique in the second over and hit him for a six and a boundary. Rayad Emrit ended Wright’s quick knock by forcing him to hit straight to Fabian Allen at mid-wicket for 33. When Siddique had Chris Gayle caught at long-on by Rovman Powell, Team Abu Dhabi slipped to 38 for 3 in 3.1 overs.

Joe Clarke began by hitting Siddique for two consecutive boundaries. Warriors re-introduced Riaz for the fifth over to make it tougher for Abu Dhabi. He gave away just eight runs, and at the half way mark, Abu Dhabi was only 56 for 3. When Wayne Parnell, who bowled the sixth over, gave away only six runs, Abu Dhabi’s hopes of notching up a total over 100 runs began to fade.

Sri Lanka’s 22-year-old pacer Dhananjaya Lakshan bowled a tighter seventh over giving away just five runs. Clarke opened out in the eighth over and hit Emrit for two sixes and two boundaries to take 22 runs in the over. Ben Duckett too chipped in by hitting Lakshan for two sixes, one over deep square leg and another over long-on to steer the total past the 100-run mark.

Clarke hit the first two balls of the last over from Parnell for boundaries. He reached his half-century off the fifth ball in 24 balls to ensure Abu Dhabi an impressive total.

Fletcher hit a quick 30 runs off 15 balls to set the stage for the chase. The in-form Suri played another brilliant unbeaten knock of 30 off 15 balls while Tom Moores made it easy through a breezy unbeaten 38 off just 12 balls.

Pune had posted a challenging 115 for 3 through Tom Kohler-Cadmore’s elegant 48 runs and Alex Davies’s unbeaten 41. Bangla Tigers raced to the target with eight balls to spare.

Earlier, Bangla Tigers won the toss and elected to field. Pune Devils’ opener Cadmore, who hit an unbeaten 61 in his last match against Team Abu Dhabi, continued the same way. He began by hitting Mujeeb Ur Reman’s third delivery of the first over for a boundary through the off-side and then lifted the next one for a six over long-off.

Matheesha Pathirana, an eighteen-year-old medium pacer from Sri Lanka, did not give Cadmore or Kennar Lewis the liberty to hit boundaries. Cadmore made up for it in the third over from Mujeeb by hitting him for a six to long- off and a boundary through the covers to take 14 runs off that over.

Karim Janat, known for his ability to bowl tight overs, did just that and got the wicket of Lewis, caught at mid-off for 9. Cadmore could pick only one boundary in the fifth over from Qais Ahmad and at the halfway mark Pune were 55 for 1.

Next man Chadwick Walton, who joined Cadmore, lasted only four balls before hitting Fazalhaq Farooqi into the hands of Quaiz at long-on. Pune slipped into more trouble when Qais, who was introduced to bowl the seventh over, had Cadmore caught at deep square- leg for 48. This reduced Pune’s chances of posting a big total.