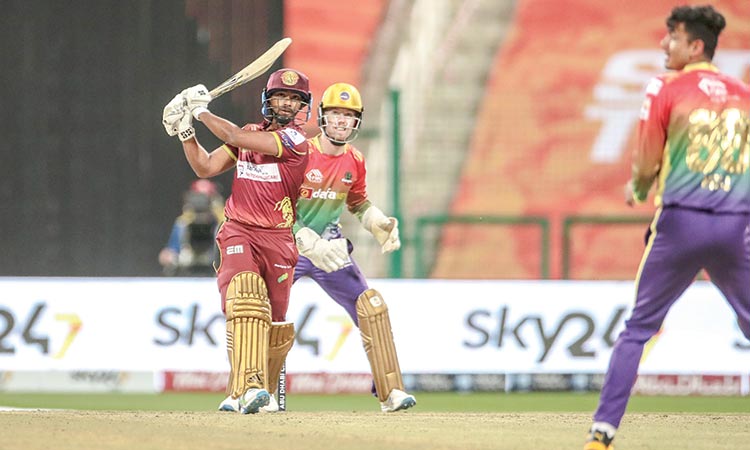 It was a shower of sixes from Pooran in the 11th match of the Alubond Abu Dhabi T10 at the Abu Dhabi Zayed Cricket Stadium. At one stage it looked like Pooran was giving a lesson on power-hitting.

Bangla Tigers chased bravely through their skipper Andre Fletcher who hit 53 runs off 28 balls with four boundaries and four sixes. He was well backed by UAE’s Chirag Suri who hit an unbeaten 42 off 16 balls with five sixes, but they fell short of the target by 30 runs.

Bangla Tigers won the toss and put Northern Warriors into bat. Northern Warriors got off to a quick start picking 17 runs off the first over with opener Waseem Muhammad hitting two sixes off Mohammad Irfan. In the second over, Mujeeb Ur Rehman had Waseem out for 12 getting him caught at long-on.

Then Nicholas Pooran walked in and began hitting right away. He hit George Garton for a six and Simmons too hit a six to pick 16 runs off that over.

Qais Ahmed, who bowled the fourth over, was hit for 23 runs. It included Pooran’s three sixes and one boundary. Though Simmons hit Karim Janat for a six, only 13 runs came off that over. The sixth over saw Pooran in full flow hitting Mohammad Irfan for three successive sixes. Pooran raced to his half-century in the seventh over off 17 balls.

When Garton was re-introduced in the eighth over, Pooran hit him for four successive sixes and two boundaries to take 32 runs off that over. Karim Janat removed Lendl Simmons by having him caught at long-off for 41. He also ended Pooran’s knock by having him caught by Andre Fletcher at extra cover off the next ball. That over yielded just five runs. In the last over from Qais Ahmed, Rovman Powell hit a boundary and a six to remain unbeaten on 13.

Chasing the mammoth score of 162, Pakistan pacer Wahab Riaz struck a huge blow when he clean bowled Johnson Charles for a duck with the third ball. In the second over, Andre Fletcher hit Junaid Siddiqui for a boundary and a six. Afif Hossain too picked his first boundary in that over. Fletcher began to stroke freely hitting Riaz for two successive boundaries. In the fourth over, Fletcher became more aggressive hitting Ryan Emrit for two successive sixes. Fabian Allen had Hossain caught by Powell at deep mid-wicket. UAE’s Chirag Suri joined Fletcher and at halfway, Bangla Tigers need another 113 runs from the last 30 balls.

Wayne Parnell, who took a hat-trick in his last match, bowled the sixth over and gave away just seven runs. Suri lifted Allen for two consecutive sixes off the first and second deliveries of the eighth over. He also lifted the fourth delivery for another six to take 31 runs off that over.

Emrit was introduced again to bowl the ninth over. Fletcher lifted Emrit over long-on and reached his half-century in 22 balls. Bangla Tiger went past the 100 run mark through Suri’s elegant six over the point off Emrit. With 49 runs needed off the last six balls, Junaid Siddiqui trapped Fletcher leg before for 33 to end their chase. Suri remained unconquered with a quick 42.

Overton, accelerated the run chase when it was most needed and helped Team Abu Dhabi beat Pune by five wickets to record their first victory of the season.

Pune looked like sailing towards another victory after their opener Tom Kohler-Cadmore had hit an unbeaten 61 off 25 balls with five boundaries and five sixes and had helped their team post an impressive 129 for 4 in the ten overs.

Team Abu Dhabi had won the toss and followed the usual trend of opting to bowl first. Usman Shinwari, who opened the bowling for Team Abu Dhabi, let Kohler-Cadmore get only one boundary in the over. In the second over, Cadmore hit Rohan Mustafa for three consecutive boundaries to launch his attacking innings.