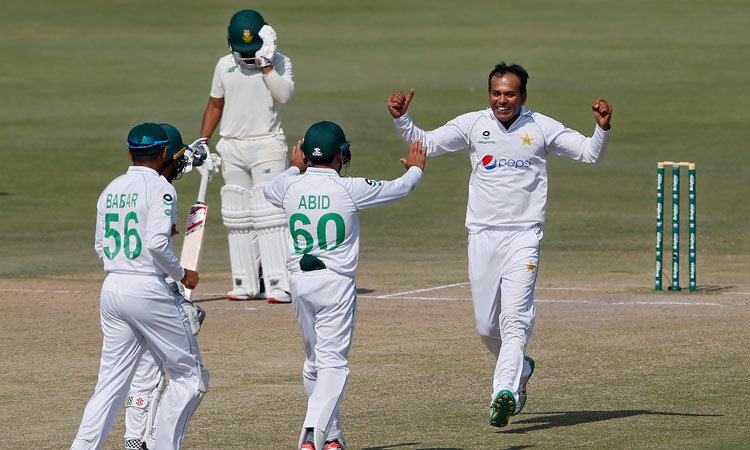 Nauman Ali (R) celebrates with teammates after taking the wicket of Temba Bavuma during the fourth day of the first Test at the National Stadium in Karachi on Friday. AP

Nauman Ali made a spectacular debut with five wickets and fellow spinner Yasir Shah grabbed four to give Pakistan a seven-wicket victory in the first Test against South Africa in Karachi on Friday.

Nauman, making his Test bow at the age of 34, finished with 5-35 and Yasir took 4-79 as South Africa slumped to 245 all out in their second innings on the fourth day on a wearing National Stadium pitch that favoured spin bowlers. 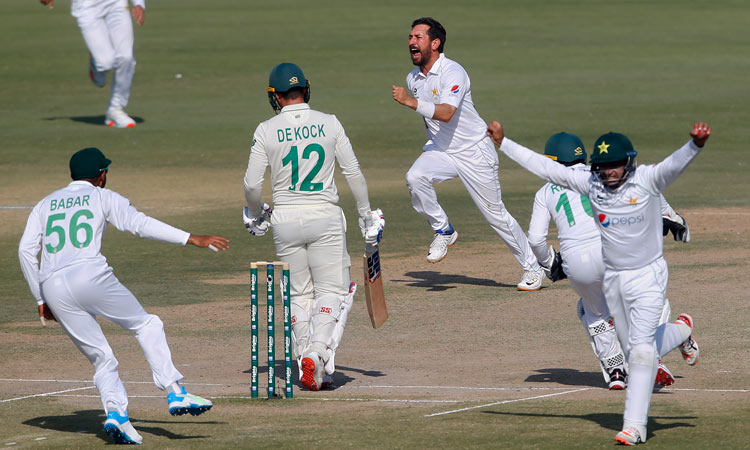 Pakistan, needing 88 for victory, lost openers Abid Ali, Imran Butt and Babar Azam for a total of 52 runs before achieving the target in 22.5 overs to take a 1-0 lead in the two-match series. The second Test starts on Feb.4 in Rawalpindi.

Azhar Ali was 31 not out while Fawad Alam — who hit a fighting hundred in the first innings — hit the winning boundary. It was only Pakistan's fifth victory against South Africa in 27 Tests.

Anrich Nortje bowled Abid in the first over after lunch and then had Butt caught behind to finish with figures of 2-24. Azam, on his Test captaincy debut, was dismissed leg before by Keshav Maharaj.

"The credit goes to the players," said Azam. "Our bowling was outstanding on a slow pitch and the way Yasir and Nauman bowled, it helped us get wickets.
"When we lost four early wickets Fawad and Azhar put on a good partnership as they showed their experience. It gave us a boost and a very crucial lead."

Azam's counterpart Quinton de Kock, who endured a miserable 50th Test of his career, rued South Africa's first innings collapse. "I think our first innings cost us the game," said de Kock. "That was a big reason for our loss."

It is South Africa's first tour of Pakistan in 14 years, after a deadly attack on Sri Lanka's team in 2009 halted visits by foreign sides.

De Kock dismissed suggestions that South Africa took too long to adjust to the conditions. "We practised enough here but I think we were a bit soft in the first innings," he said.

In a spinners' battle on a brownish wicket, Nauman recorded figures of 7-73 and Yasir 7-133. In contrast, South Africa's spin bowlers managed just four wickets.
Pakistan had taken a crucial 158-run first innings lead thanks to a fighting century from Fawad and half centuries from Faheem Ashraf and Azhar. 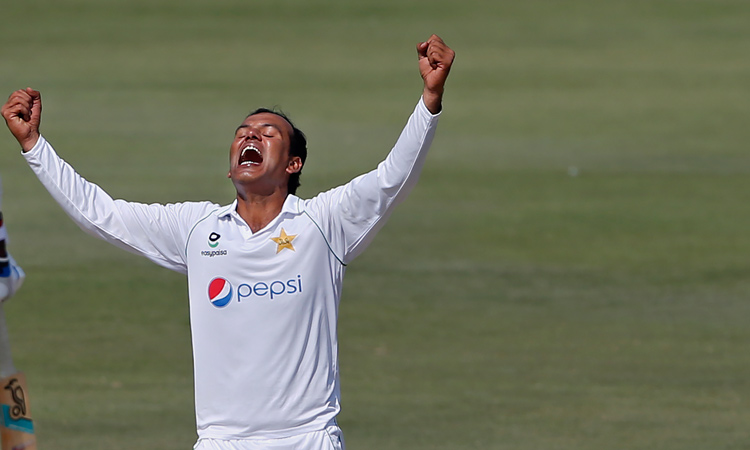 Nauman Ali celebrates after taking the fifth wicket during the fourth day of the first Test. AP

The writing was on the wall as South Africa lost nightwatchman Maharaj on the first ball of the day, bowled for two by pacer Hasan Ali. De Kock followed his 15 in the first innings with just two runs as he was caught off a lazy push off Yasir.

Temba Bavuma, who scored 40, added 42 for the seventh wicket with George Linde before being the last man out as Nauman took the last four wickets in a rapid 22 balls.

Having earlier removed Aiden Markram, who was caught by Abid Ali, Nauman dismissed Linde for 11, Kagiso Rabada for a single run, and Anrich Nortje for a duck, before trapping Bavuma lbw.

His impressive performance made him just the 12th Pakistani bowler to take five wickets in an innings on his debut.