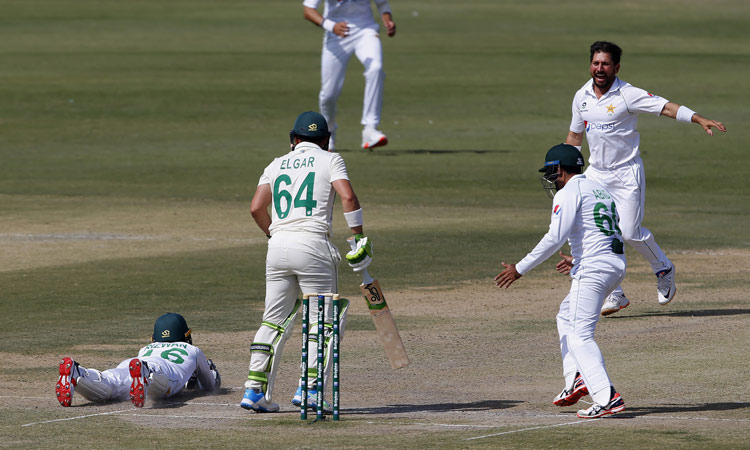 Yasir Shah and Abid Ali celebrate while teammate Mohammad Rizwan takes the catch of Dean Elgar during the third day of the first Test at the National Stadium, in Karachi on Thursday. AP

South Africa were 187-4 at close on the third day of the opening Test against Pakistan in Karachi on Thursday, leading by 29 runs.

Pakistan's spinners Yasir Shah and Nauman Ali grabbed three wickets in the space of ten runs to halt South Africa's fightback on the third day of the first Test in Karachi.

When it looked like South Africa would end the day at parity after wiping out Pakistan's big 158-run first innings lead, Yasir struck twice and Nauman once to leave the tourists on 187-4 at close. 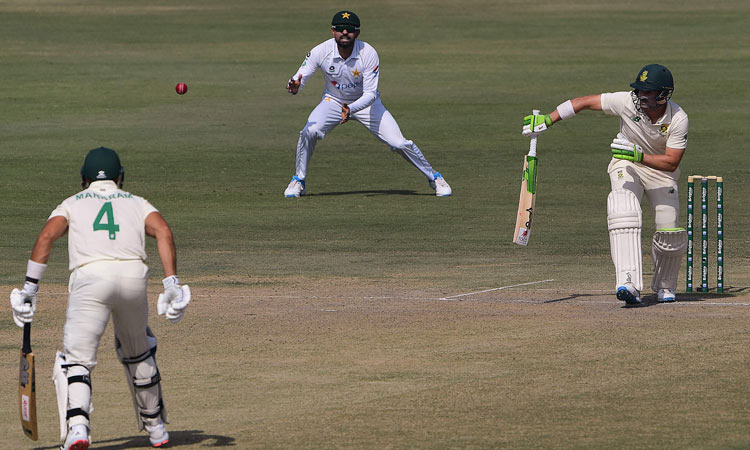 Dean Elgar plays a shot as Babar Azam watches during the third day of the first Test. AFP

Nightwatchman Keshav Maharaj was unbeaten on two and skipper Quinton de Kock was yet to score, as South Africa now lead by 29 runs with six second innings wickets in hand.

ICC to honour young and promising cricketers with monthly award

Opener Aiden Markram, who scored a polished 74 for his 8th fifty, added 127 for the second wickets with Rassie van der Dussen who scored a solid 64.

But Yasir, with figures of 3-53, changed the scenario by dismissing Dussen caught and then trapped Faf Du Plessis leg-before for ten, while Nauman had Markram caught by a close-in fielder to trigger a three wicket collapse in 33 balls.

Both Yasir and Nauman will be major threats for South Africa on a fourth day National stadium pitch which produced 14 wickets on day one, four on the second and six on the third.