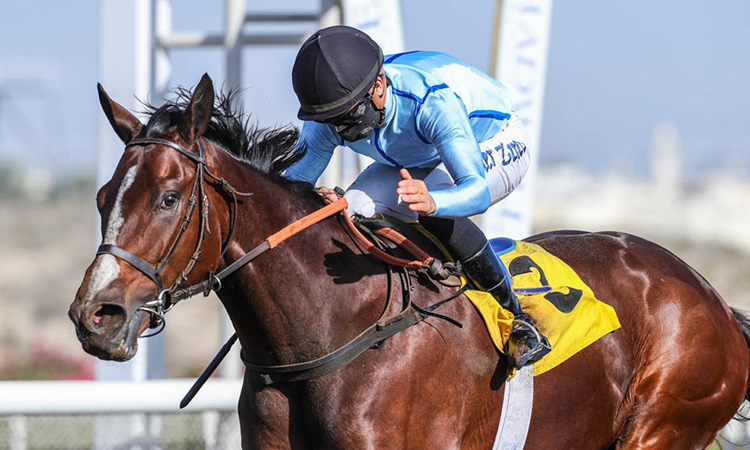 Xavier Ziani led outsider Blown By Wind to something of a shock win in the biggest race of the Jebel Ali season, the Group 3 Jebel Ali Mile, on Friday afternoon, thus denying the 2019 winner, Secret Ambition, a second win in the feature.

In notching the win after shooting clear inside the final 100m, Blown By Wind not just completed a treble for trainer Salem Bin Ghadayer after the first four races on Friday, but provided the trainer a second consecutive success in the 1600m highlight after Chiefdom landed the spoils last year for Royston Ffrench.

Ffrench, meanwhile, who opted to ride Hypothetical, faded into fourth, having held every chance entering the final 300m, about the same point that Ziani pulled the winner out to challenge.

A 5-year-old gelded son of Invincible Spirit with five British victories to his name when trained by Mark Johnston, the winner was third to Hypothetical on both their local debuts in a 1600m Meydan dirt handicap a fortnight ago. He reversed that form in no uncertain terms, as well as with Alkaamel, who was second in the same race, but only fifth in this.

A delighted Ziani, riding his biggest UAE winner, said: “Royston rode this horse at Meydan and they did very well to finish third having completely blown the start.

“To be honest, I was actually pretty confident travelling here today because I have been riding him in the mornings and he is a very good horse. I think the Godolphin Mile will be a realistic target, but that is up to the boss!”

The opening 1400m handicap was won emphatically by Hyde Park, probably never headed under Royston Ffrench riding for Ghadayer in the silks of Sultan Ali. Seemingly never under pressure, once Ffrench committed for home about 450m from home the race was over as a contest, the 7-year-old Oasis Dream gelding winning for the third time, but first locally after 15 previous UAE outings. Previously trained in Britain by John Gosden for his breeder, Prince Khalid Abdullah, this was his first success since August 2017. He made his local debut in February 2018.

An hour later, jockey and trainer were celebrating a double, Sheikh Hamdan the successful owner on this occasion after the smooth success of Hurry Up in a 1200m conditions contest for 3-year-olds. Fastest of the nine runners out of the stalls, Ffrench was soon out in front aboard the Blame colt and, once he let out an inch of rein just inside the final 400m, the race was settled. Second behind the very useful Mouheeb on debut, over this 1200m course and distance, he then won an identical maiden three weeks later, but this was undoubtedly a career best, at least to date.  It was some training performance for Ghadayer who only saddled the four runners on the whole afternoon.

Representing the ‘home team’ of racecourse patron Sheikh Ahmed Bin Rashid Al Maktoum, his principle trainer Nicholas Bachalard and their retained jockey, Ryan Curatolo, Shamikh was far too good for eight opponents in a 1400m conditions race restricted to 4-year-olds. Making just his third career appearance, the colt by Lea was settled just in behind the early pave before cruising to the front passing the 400m pole. Curatolo shook his reins about 200m later and the race was won, in a stylish manner. Victorious on debut in November, over this course and distance, Bachalard’s charge was then well beaten over 1900m on dirt at Meydan and clearly appreciated the return to his local track, being trained at the adjacent Jebel Ali Stables.

Denied with Secret Ambition in the big race, Satish Seemar and Tadhg O’Shea earned some minor compensation in the 1600m handicap that followed, combining with Mazagran who pretty much made every post a winning one for owner Ailan Hamad Kadfoor Al Mehairi.

A 1950m handicap, the longest race on the card, was another contest to produce something of an unexpected winner, Adrie de Vries producing Obeyaan to lead inside the final 100m, thwarting Pick Six favourite Maqaadeer. A maiden after 12 starts, nine for Fawzi Nass, this was a fourth appearance since joining Mujeeb Rahman this season and the 5-year-old entire son of Tiznow was making a quick return to the track having been well beaten in fifth over 1900m on the dirt at Meydan just last Saturday.

The admirable Shanaghai City registered his third victory of the campaign second over course and distance, with a fairly straightforward score in the concluding 1000m handicap. Partnered by Fabrice Veron, as he was when they scored under these conditions in December and just over a week later in a 1600m handicap on turf at Abu Dhabi, the 5-year-old Shanghai Bobby entire powered past Musabbeh Al Mheiri pair Dahawi and Taneen to win going away from his rivals at the end.