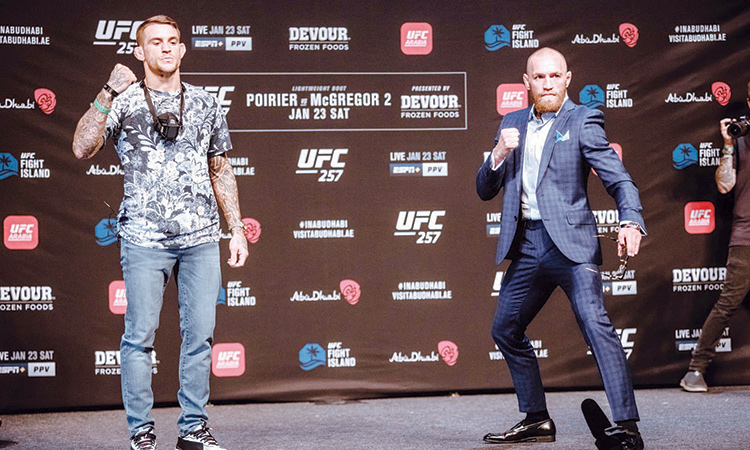 Conor McGregor and Dustin Poirier face off during a pre-event press conference at Etihad Arena on Thursday. Courtesy: UFC

Conor McGregor has promised to put on a ‘masterpiece’ when he makes his first UFC appearance in the Middle East, against Dustin Poirier at the Etihad Arena on Sunday morning.

All eyes on of the world will be on Abu Dhabi again on Sunday for the finale to the UFC Fight Island Triple Header, the weeklong three-event epic series taking place on Yas Island. And McGregor has promised fans they are in for a treat.

Addressing a pre-event press conference at Etihad Arena, in front of fans, McGregor said: “It feels pretty good now to be back in front of the crowd. It might be a small crowd at the moment but it feels great.”

“I love the game, I love combat; I’m excited to go out there and compete with Dustin again,” added McGregor who beat Poirier by TKO in their first match in 2014.

“I have confidence in my ability. I have put in a tremendous amount of work. I want to finish him, but I’m hope for a good long bout. I have a million shots look forward to getting out there and putting on a show for fans around the world.

“I’m in some shape, I’m coming to put on a masterpiece.”

Opponent Poirier, back in Abu Dhabi for the first time since losing the lightweight title fight to Khabib Nurmagomedov in 2019.

“It’s good to see us moving in the right direction having fans back. UFC and Abu Dhabi are doing great things, doing it safely. I’m excited to put on a show,” said Poirier.

“I know what a win over Connor McGregor means. Whoever wins on Sunday is fighting for gold.”

Poirier hasn’t forgotten his first fight against McGregor from six years ago but rather than being consumed about what went wrong that night, he prefers to think about all the ways he’s changed since then.

The easiest difference to note would be Poirier’s change in weight class after he stopped suffering in order to cut down to 145 pounds and decided to turn his full attention to the lightweight division.

Since that time, Poirier has been one of the best fighters in the world while knocking off several former and future champions including Eddie Alvarez, Justin Gaethje, and Anthony Pettis.

Co-main event star Michael Chandler is ready to make his UFC debut and says he is ready to show the world what he can do.

“It’s been 10 long months without fans, so it’s nice to share this opportunity with them. There were times when I didn’t think this happen, but this (UFC) is my home now and looking forward to it,” said Chandler who was on Fight Island back in September conditioning for his debut.

“I’ve trained to fight the number one fighter in the world. All roads have led to this, watching the guys compete for a long time and always wanted to step up and I’m ready for it. It’s a big opportunity.

Opponent Dan Hooker, who fought one of the fights of 2020 against Poirier, said: “I respect  Michael. I’m expecting a fast start but I’m not one to back down from a challenge.

“At the end of the day, the only reason ‘m here is because everyone above me wouldn’t fight me.”