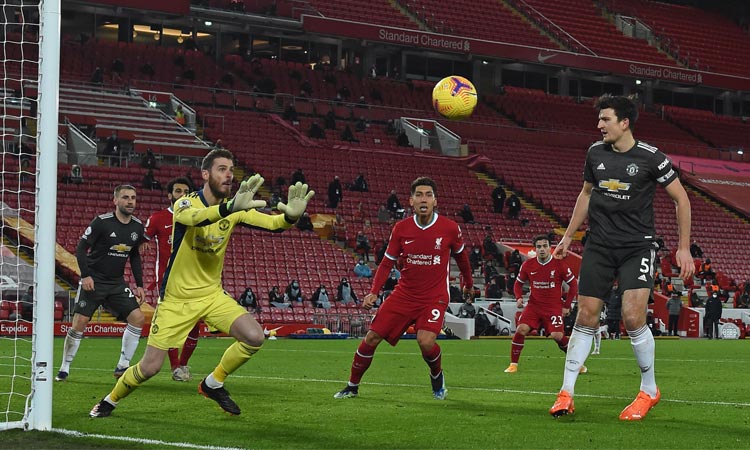 Manchester United' goalkeeper David de Gea catches the ball during the match at Anfield in Liverpool on Sunday. AFP

Manchester United held onto top spot in the Premier League after grinding out a dour 0-0 draw at title rivals Liverpool, while Tanguy Ndombele's stunning strike sealed Tottenham's 3-1 win at Sheffield United on Sunday.

Ole Gunnar Solskjaer's side had the better chances in a strangely subdued clash between two of English football's bitterest rivals.

United are three points clear of third placed Liverpool and two ahead of second placed Leicester.

United are top after the New Year for the first time since Alex Ferguson's retirement in 2013 thanks to nine wins in an 12-match unbeaten run. 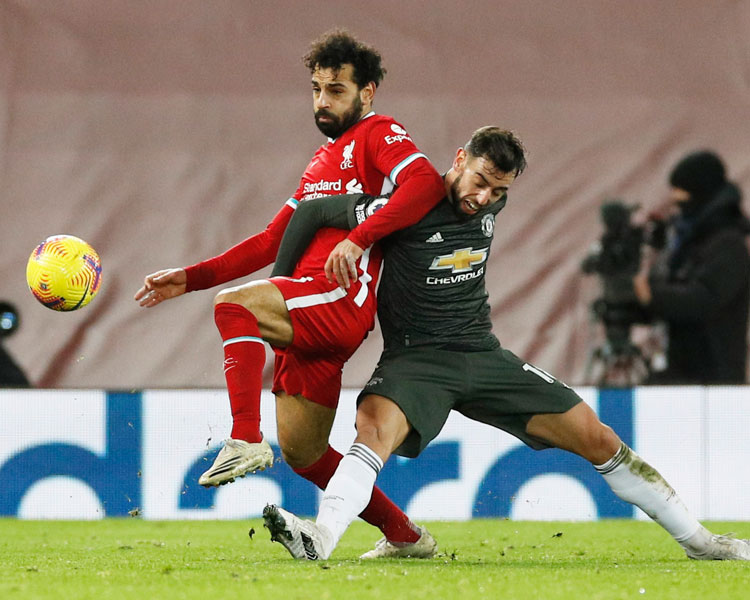 Leaving Anfield unscathed is a solid result for United as they chase a first title in eight years, but they might feel it was a missed opportunity to pile pressure on injury-hit Liverpool given their recent struggles.

It is the first time these two old foes have been involved in a title race together since 2009 when United, then at their peak, held off Liverpool's challenge.

But there was little feel of a seismic encounter as both teams largely played with the handbrake on at an empty and silent Anfield.

Pogba delighted as Utd go top of the Premier League

Liverpool are well short of the dynamic form that carried them to the title last season and the Champions League in 2019. Jurgen Klopp's team have now gone four league games without a win and are without a goal in their last three top-flight matches.

Liverpool defender Joel Matip wasn't fit enough to feature, so Jordan Henderson had to play as a makeshift centre-back alongside fellow midfielder Fabinho.

Despite that setback, Liverpool dominated a cautious first half with over 65 per cent of the possession.

They lacked a cutting edge in the final third and Roberto Firmino shot wide before Mohamed Salah volleyed over.

It took United 34 minutes to have a shot and they almost took the lead from it as Bruno Fernandes whipped his free-kick inches wide.