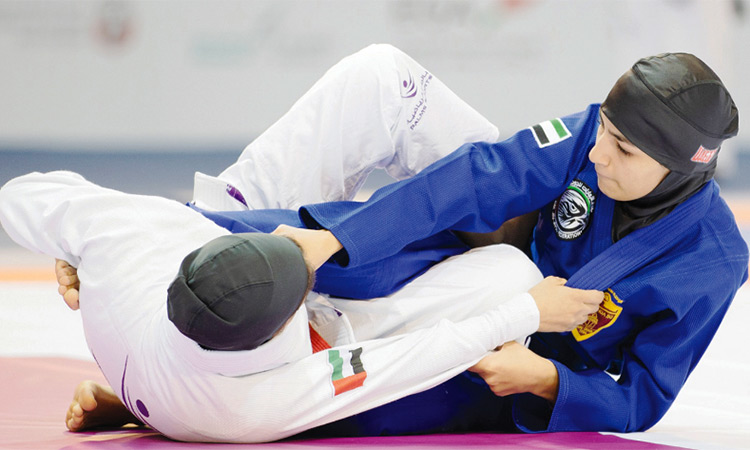 Al Wahda’s total of 2,260 points ensured that they comfortably took the lead in the Adults category.

Al Wahda Jiu-Jitsu Club recorded a strong start in the first rounds of the revamped Mother of Nation (MoN) and Vice President’s Jiu-Jitsu leagues, comprehensively claiming the Adults title in both tournaments held at Dubai’s Al Nasr Sports Club in Dubai on Friday and Saturday, respectively.

Al Ain’s young brigade seemed to draw inspiration from the heroics of their female teammates as they put together commanding performances to take home the Under-16 and Under-18 titles at the Vice President’s Jiu-Jitsu League.

Baniyas (900) rounded off the podium places with a creditable third place finish. The Vice President’s Jiu-Jitsu Leagues’ first round was a keenly contested affair with over 200 fighters taking to the mats representing 16 clubs from all across the UAE.

In the MoN Jiu-Jitsu League, Merah Al Saeedi, Meera Al Jarjawi, and Triva Ridha all helped Al Wahda’s surge in the Under-16 category, clinching gold medals to put up valuable points on the board and help their side build a sizeable lead. In the Adults category, dominating performances from Shamsa Al Ameri, Aylla Silva, and Stephany Vieira were the highlights as their gold medals helped install their side at the ranking’s summit.

Al Wahda tallied a total of 1550 points in the Under-16 division, comfortably pulling clear of Al Jazira (1210) and Palms Sports – Team 777 (900), while in the Adults division, the difference was even wider as they bagged 2260 points while second-placed Al Ain could only manage 1750 and Palms Sports - Team 777 mustered 600 to finish third.

Al Ain’s performance though in the Under-18 division was that of complete dominance as the club ended the first round with a whopping 2130 points, far ahead of second-placed Al Wahda (1380) and Al Dhafra (880).

In other notable results, UAE national team star Wadima Al Yafei extended her dominance in the 45 kg Adults weight-class, winning the gold comfortably while rising star Balqees Abdulla, turning out for Palms Sports - Team 777 did her steadily growing reputation as a fighter to watch out for no harm, triumphing in the Under-18 48 kg class.

Earlier Balqees had said: “I am thankful to the UAEJJF for providing us the chance to resume our training in a safe and healthy environment.

“I am really looking forward to competing in the first round of the prestigious tournament and to make a winning start.

“Starting confidently in a big tournament like the MoN Jiu-jitsu League is crucial and I am confident that with the work we have done in the pre-season, we will be putting our best foot forward on the mat,” she added.

More than 150 fighters from 10 jiu-jitsu clubs have registered for the tournament, which will be held in strict adherence to stringent local and federal health and safety protocols. The MoN Jiu-jitsu League, considered the premier tournament for female athletes in the UAE, will be played over four more rounds with athletes competing across three categories - under-16, under-18, and Adults.