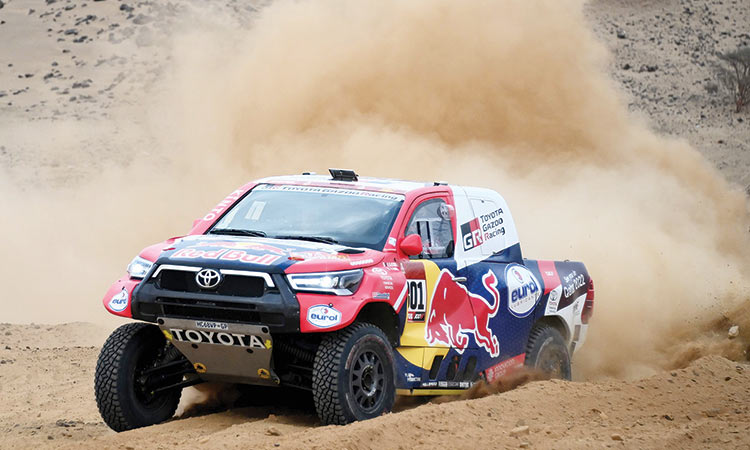 Toyota’s driver Nasser Al Attiyah (right) and his co-driver Mathieu Baumel at a driving session on the eve of technical checkup in Jeddah, on Thursday. Agence France-Presse

Staged in Africa between 1979 and 2007, the world’s most famous rally shifted to the mountainous terrain of South America between 2009 and 2019.

The rally’s transfer to Saudi Arabia in 2020 returned 50-year-old Attiyah to the Gulf desert environment he knew best, having been born in Doha, the Qatari capital.

“I adopted a different physical programme which concentrated on building muscle,” he told AFP ahead of the competition which gets underway on Saturday and lasts until Jan.16.

Along with his French co-driver Mathieu Baumel, “we trained according to the countries holding Dakar”, he said.

As a result of lockdown rules in response to the coronavirus pandemic, the champion driver was forced to adapt his preparation.

“I have a simulator at home and a sports room which allows me to stay in the rallying atmosphere,” Attiyah said.

Behind the wheel of his Toyota, Attiyah came second at Dakar 2020, the first edition of the race staged on the Arabian peninsula, behind Spain’s Carlos Sainz (Mini) and ahead of Frenchman Stephane Peterhansel (Mini).

Attiyah is a potent symbol of the rise of Qatar, the small Gulf emirate which in a matter of decades has transformed itself into a sporting powerhouse.

Before training at the vast Aspire sporting academy in Doha, Attiyah had struggled during his younger years to finance his dream of becoming a winning racing driver.

Nicknamed “Superman” by his compatriots for his ability to “dance on the sand dunes”, he has been Middle East champion on 16 occasions, won 75 regional competitions, three editions of Dakar and lifted the all-terrain rally world cup four times.

Despite his success at the wheel, he also turns his hand to Olympic skeet shooting.

Attiyah is now preparing for the virus-delayed 2021 Olympics after securing fourth-place at the Athens Games in 2004 and bronze at London 2012.

BRX PARTNER WITH RED BULL FOR DAKAR: Bahrain Raid Xtreme (BRX) is excited to announce a new partnership with Red Bull as the team embarks on its maiden Dakar Rally – one of the toughest sporting events in the world.

Red Bull – with its own rich history in extreme sports and multiple motorsport series across the world – is the perfect partner to support Prodrive-run BRX team on its first Dakar Rally. Together, BRX and Red Bull will negotiate the gruelling conditions of the Saudi Arabian desert over a 7,646km (4,751-mile) race.

BRX Chief Marketing & Partnership Development Director, Chris Long, said: “Bahrain Raid Xtreme are very excited to welcome Red Bull as an Official BRX Partner. Just as the team behind BRX, Red Bull has an incredibly rich history in sport – with its own teams, partnerships and athletes – in extreme sport and multiple motorsport series across the world. With the combined experience of Red Bull and BRX, we are very excited to take on the Dakar Rally with our new partner and excited to see what the maiden rally will bring.”

BRX Driver, Sébastien Loeb, said: “I am very excited to have Red Bull on board for my Dakar adventures, and first journey with Bahrain Raid Xtreme. I have personally worked with Red Bull for several years and know that it is a brand that shares similar ambition and experience to the team at Bahrain Raid Xtreme.”

BRX is the product of a joint venture between Prodrive, and the Kingdom of Bahrain, to form Prodrive International. The new team will embark on its maiden Dakar Rally, beginning from Jeddah, Saudi Arabia on Sunday. 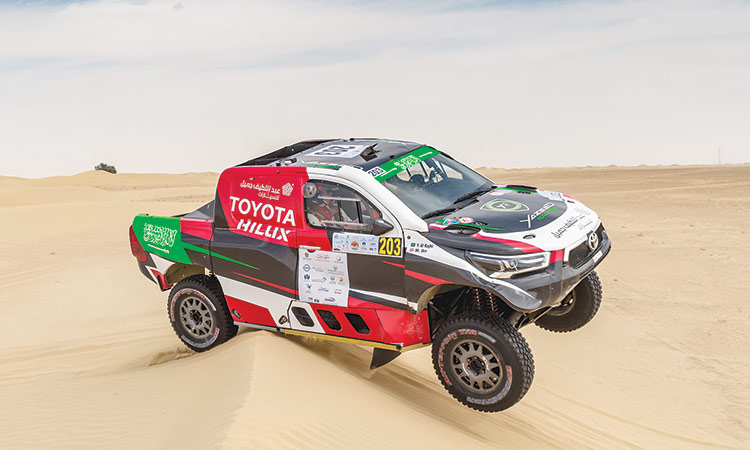 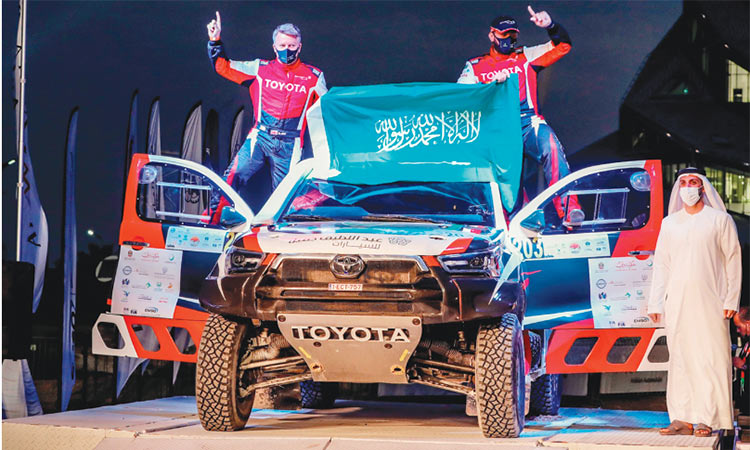