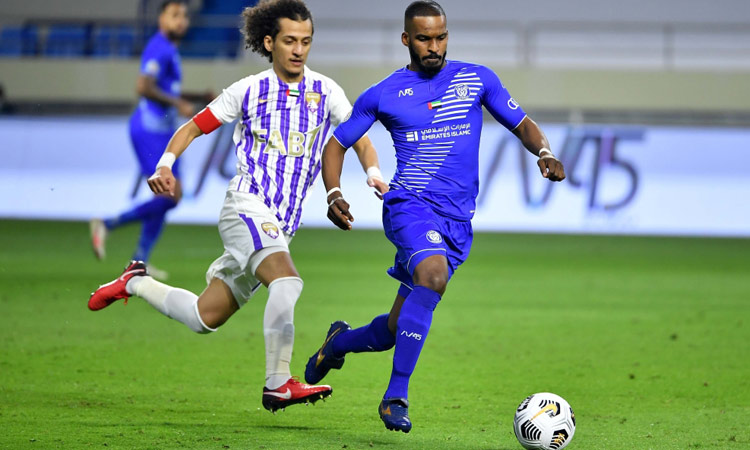 Al Ain and Al Nasr players in action during their AGL match at Al Maktoum Stadium on Friday.

The first goal came in the fifth minute when Ramon Lopes found Amir Mubarak’s pass inside the penalty area and fired home.

Lopes came close to doubling Khorfakkan’s lead in the 16th minute but his effort went over the bar.

Khorfakkan goalkeeper Mohamed Yousef blocked an attempt from Ajman in the 20th minute.

In the 55th minute, Bobker Trawally missed a chance to open the scoring for Ajman. He then reduced the deficit in the 77th minute from the spot.
Khorfakkan raised their tally to eight points, while Ajman remained on three points points.

The first chance of the game came early in the match, when in the sixth minute Al Nasr captain Mohamed Abdelrahman fired a shot from outside the penalty area but which was blocked by Al Nasr keeper Ahmed Shambih.

Al Ain keeper Khaled Eisa pulled off a good save to deny Diaa Saba in the 12th minute, before denying him once more in the 18th minute of the half.
After reviewing the VAR, Al Ain’s Bandar Al Ahbabi was sent off following a rough challenge against Al Nasr player in the 23rd minute.

Despite being one man down, Al Ain opened the scoring in the 37th minute when Salem Abdulla passed the ball to Mohamed Abdelrahman, before Mohamed Ali Ayed converted the ball into his own net to hand the Boss a 1-0 lead.

Al Ain doubled their lead in the 57th minute when Rafael Pereira converted home off a good cross from Caio Canedo.

Al Nasr reduced the deficit 20 minutes from time, when defender Tsukasa Shiotani scored an own goal into his side’s net.

Al Nasr came close to scoring the equaliser in the dying minutes of the game after Brandley Kuwas fired a backward shot in the penalty area but was blocked by Eisa.