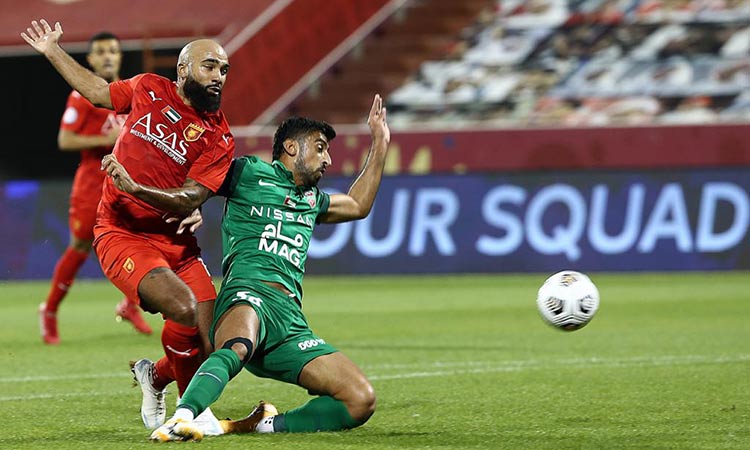 Players of Fujairah and Shabab Al Ahli vie for the ball during their Arabian Gulf League match on Friday.

Fujairah: Fujairah earned their second win of the season after defeating Shabab Al Ahli 3-2 in a thrilling match at the Fujairah Stadium in matchweek 10 of the Arabian Gulf League on Friday.

Five goals were scored in the first half of the game, as Fujairah netted three goals and Shabab Al Ahli scored two.

The first chance of the game came in the first minute when Carlos Eduardo fired a powerful shot from outside the area but his effort went wide of the post.

Eduardo threatened again in the 7th minute when his header was saved by keeper Al Tamimi and diverted it into a corner.

In the 18th minute, Fujairah capitalised on a defensive mistake from Shabab Al Ahli as Kristiano Samuel Armenteros scored the first goal of the match.

Shabab Al Ahli made a comeback on the half-hour mark, when Saeed Al Balooshi scored their first goal off a short-range effort.

Five minutes later, Shabab Al Ahli netted the equaliser after Igor Jesus made it 2-2 with a header in the 35th minute.

Fujairah made a comeback deep into injury time when Farley Rosa converted from the spot to hand his side a 3-2 lead.

No real chances were created in the second half, as Fujairah grabbed the three points to raise their tally to seven points, while Shabab Al Ahli remained on 14 points.

Al Jazira were already 1-0 up after two minutes only, when Milos Kosanovic fired a powerful shot off a freekick.

Ali Saleh came close to scoring the equaliser in the 11th minute following a powerful shot from outside the area, but Ali Khasif diverted it into a corner.

Al Jazira forward Zayed Alameri missed a chance to double his side’s lead in the 17th minute, as his effort hit the post.

The Pride of Abu Dhabi doubled their lead in the 21st minute after Salim Rashid converted the ball into the back of the net off a long-range effort.

Lima almost made 2-2 in the 47th minute, following a powerful shot from outside the area but Khasif blocked it again.

The Pride of Abu Dhabi netted their third goal after a counterattack from Ali Mabkhout who passed the ball to Zayed Alameri and the latter tapped home in the 51st minute.

Lima netted his second of the night in the 76th to make it 3-2, before forcing Khasif into a good save in the 85th minute. 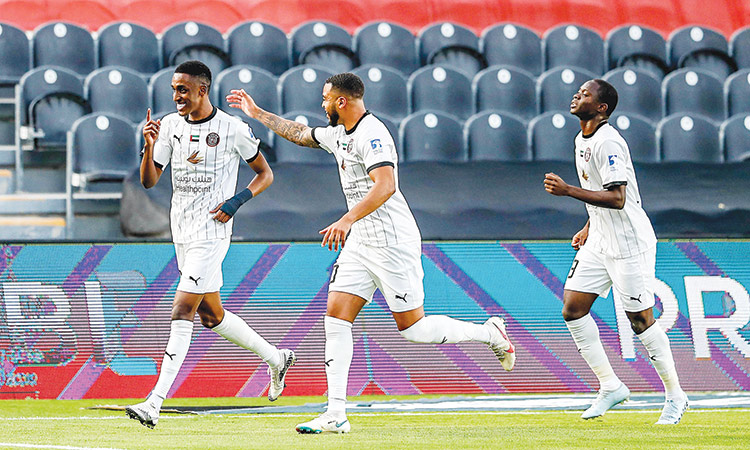