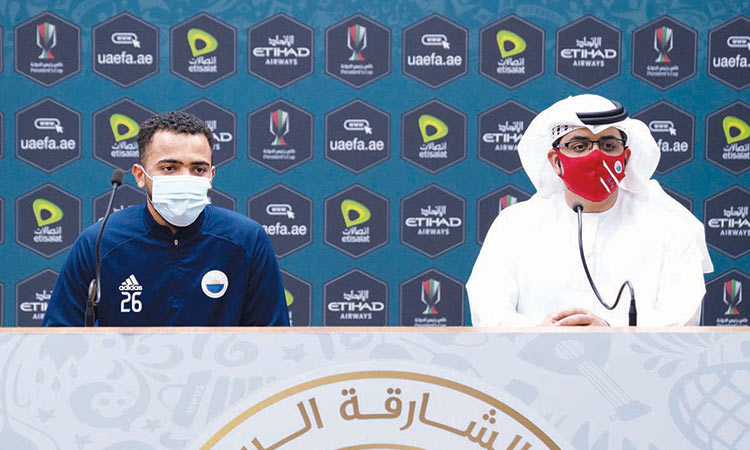 Officials addressing a press meet ahead of the President’s Cup round of 16 matches that kick off on Saturday.

Sharjah will take on Khorfakkan in a blockbuster round of 16 match of the President’s Cup at Saqr Bin Muhammad Al Qasimi Stadium in Khorfakkan at 16:35 pm on Saturday.

In the other matches of the day, Al Ain will meet Ajman at Hazza Bin Zayed Stadium in Al Ain at 16:45pm while Al Wahda will face Al Nasr at Al Nahyan Stadium and Fujairah visit Al Wasl at Fujairah Club Stadium.

Sharjah had a stellar start to the season as they went on win the first matches of the Arabian Gulf League (AGL) to go on the top of the table.

But their winning juggernaut was stopped by a lowly but gritty Khorfakkan with a 1-1 draw in the seventh round. After their winning momentum was broken, Shabab Al Ahli also played a draw against the leaders.

Sharjah coach Abdulaziz Al Anbari said he is wary of Khorfakkan as they are a good team and can spring an upset against any team on a given day.

“This match differs from the other league matches. We are fully aware of its importance and the focus it needs. We need to win the game to move into the next round of the tournament,” said Anbari.

“Khorfakkan have been playing well since the beginning of the tournament and their players come into the match with confidence and enthusiasm following the positive results they have achieved in the last two matches.”

Khorfakkan defeated Hatta 3-2 in their last AGL match after holding Sharjah prior to that game in the seventh round.

“We, on our part, know how to play in such matches to move towards achieving our goals in this tournament. As this is a knockout round and to stay afloat, we have to win the game,” he apprised.

Sharjah goalkeeper Darwish Muhammad said: “It is natural that there will be some pressure on Sharjah as a team and on us as players, as we are champions. We strive to preserve the title.

“It is an important match. We are going into the match with a high mental and physical readiness. And we have great confidence that we will able to return to winning ways,” he added.

Meanwhile, Al Nasr coach Krunoslav Jurčić said he is confident of making a positive start to the tournament in his pre-match conference.

“Al Wahda are a very good team and have excellent players in their line-up. They are a good blend of experienced and young players, what makes them a very dangerous team,” said Jurčić.

“Despite the lack of time, we have prepared all the players and made the necessary preparations for this match that we are trying to win and qualify for the next round.

“We play a lot of matches in a short period of time, like most of the world’s teams, which also suffer from the pressure of back-to-back games due to the unusual conditions resulting from the corona pandemic. So we must be careful to preserve the health of the players and avoid injuries,” he added.

The Round of 16 will conclude with four matches to be played on Sunday as Emirates Club face Ittihad Kalba at the Emirates Club Stadium in Ras Al Khaimah, Bani Yas meet Al Orouba at Bani Yas Club while Shabab Al-Ahli Dubai play with Hatta at Rashid Stadium, and Al Dhafra visit Al Jazeera at Hamdan Bin Zayed Al Nahyan Stadium. 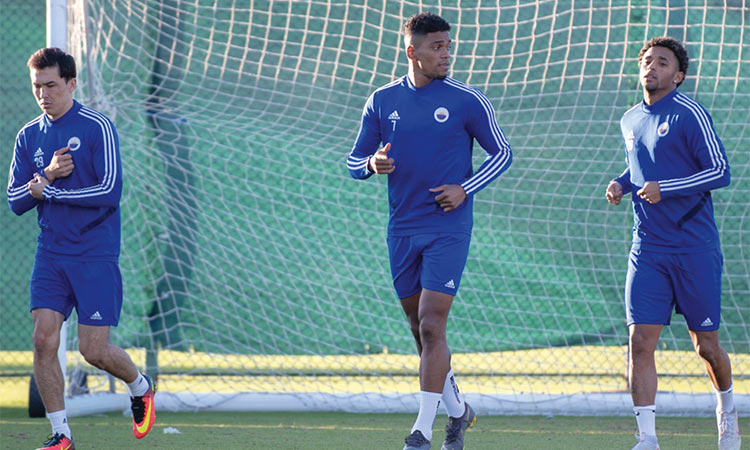 Sharjah will look to maintain their unbeaten streak in the Arabian Gulf League (AGL), when they take on less-fancied Al Dhafra in their Round 11 match at the Hamdan Bin Zayed Al Nahyan Stadium on Friday.