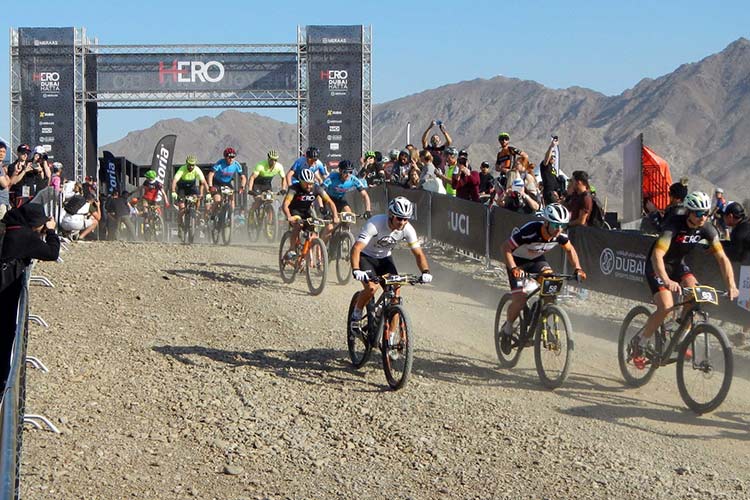 The HERO Dubai Hatta taking place on March 5, 2021 has an amazing starting list, with some elite athletes having already confirmed their spot for the first stage of the HERO World Series 2021 international circuit.

Among them Colombian cyclist Hector Leonardo Paez, who has just been reconfirmed as World Champion. He is not a new face for the organising committee as he won the HERO Sudtirol Dolomites a good six times! At the HERO Dubai Hatta Peeter Pruus and Katazina Sosna, the national champions of Estonia and Lithuania, will also be vying for a spot on the podium, ready to take on Dubai’s desert after ranking second in the previous edition.

The run up to the HERO Dubai Hatta 2021 has officially begun. This represents the first stage of the HERO World Series international mountain bike race series, part of the UCI calendar (Union Cycliste Internationale) in the Arabic peninsula.

As soon as the official date dropped (March 5, 2021), the creme de la creme of mountain biking rushed to confirm their spot at the starting line of a truly unique competition.

The 60 km and 1,600 hm route wending its way across the sands and dunes of the Hatta MTB Trail Centre features a name which surely stands out: the winner of the UCI Mountain Bike Marathon World Championships which took place in October in Sakarya, Turkey. The Colombian cyclist Paez, representing Team Giant LIV Polimedical, who has conquered the title of World Champion for two years in a row, after his first victory in 2019.

The HERO has no secrets for Paez any longer: after all, he won the HERO Sudtirol Dolomites a good six times as well as winning the first edition of the HERO Dubai Hatta.

Gerhard Vanzi, organiser of the HERO World Series international circuit, said: “Having the World Champion take part in the race makes us incredibly proud. We admire Leonardo Paez, as well as considering him a good friend, and are over the moon he will be there in Hatta. We hope the HERO Dubai Hatta brings him luck for an incredible 2021, just like it did last year.”

Among the elite athletes, Pruus (Estonia) and Sosna (Lithuania), both representing the Torpado-Sudtirol MTB Pro Team, have also secured their spot. Both cyclists ranked second in the HERO Dubai Hatta 2020 and will surely try to reach the top position on the podium this year.

But of course, the HERO Dubai Hatta is not just an event for international elite mountain bikers: the race taking place in the United Arab Emirates is for every mountain bike enthusiast who believes it is much more than a sport – it is a lifestyle. A great opportunity to test their skills during an international race against the backdrop of lush, wild nature with the top names in the world of this discipline.