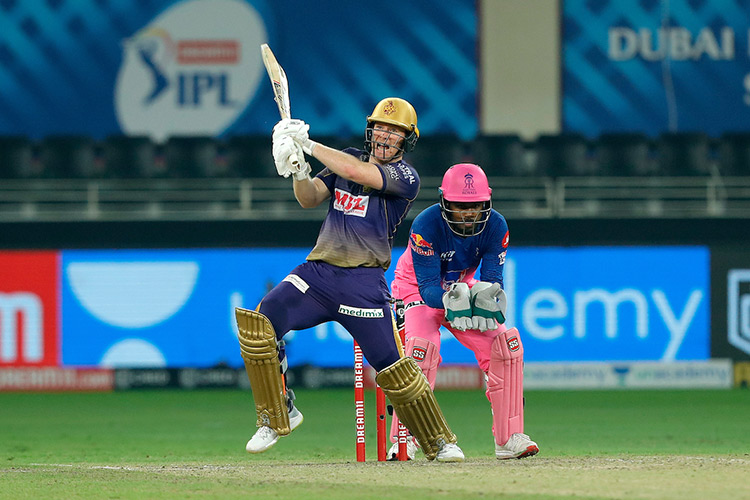 Eoin Morgan plays a shot against Rajasthan Royals in Dubai.

Captain Eoin Morgan led from the from the front with a blitzkrieg 35-ball 68 and Pat Cummins took four wickets as Kolkata Knight Riders (KKR) defeated Rajasthan Royals by a huge margin of 60 runs in an Indian Premier League (IPL) match to boost their play-offs hopes on Sunday.

Having ousted Rajasthan after Kings XI Punjab (KXIP) were eliminated by Chennai Super Kings (CSK) earlier in the day, Kolkata have boosted their qualification hopes. With Mumbai Indians (MI) having qualified, now three spots are up for grabs with four teams in fray.

Chasing a mammoth total, Rajasthan were never in contention as they got off to a stuttering start and kept on losing the wickets.

Cummins ripped through the top-order as there was an abject surrender by Rajasthan’s batsmen. None of them could manage to resist against the disciplined bowling attack of Kolkata.

Cummins had Robin Uthappa caught by Nagarkoti before getting rid of Ben Stokes in the next over. He also rattled the stumps of Steve Smith to push them on the back foot completely. They could never recover from there and kept on losing the wickets at regular intervals and could manage to muster only 131/9. 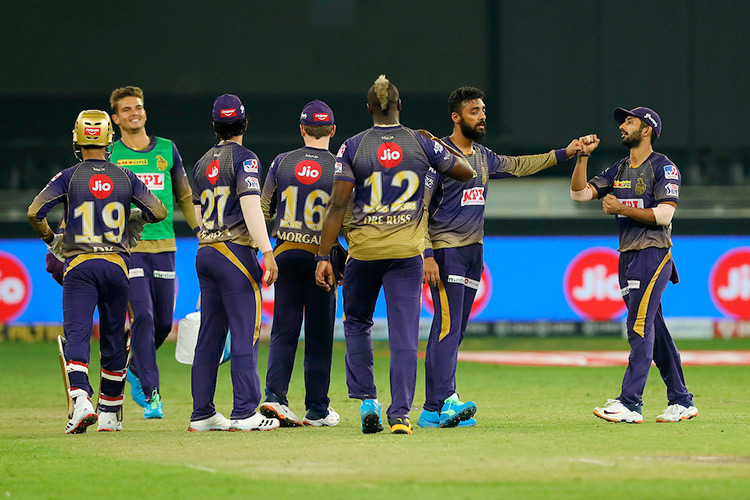 Kolkata players celebrate after their victory.

Earlier, Kolkata got off to a faltering start as they lost the first wicket with just one run on the board. Nitish Rana was dismissed by Archer for a golden duck. Shubman Gill and Rahul Tripathi anchored the innings with a 72-run partnership for the second wicket.

Rahul Tewatia got rid of Gill to give Rajasthan second breakthrough by breaking the dangerous-looking partnership. He had Gill caught by Buttler. Tewatia struck again after three balls to send back Sunil Narine for a naught. Kolkata were reduced to 74-3 from 70-1 with in a span of three balls.

At this stage Kolkata needed a partnership. But they lost another two wickets in quick-successions. Tripathi holed out to Uthappa off Shreyas Gopal. Dinesh Karthik’s bad form with the bat continued as he failed to open the account and was dismissed for a golden duck. Kolkata had lost their fifth wicket.

Karthik has been most inconsistent batsman. He has been in a terrible form despite conceding captaincy to Morgan in the middle of the tournament after a string of failures.

Rajasthan must have been left giggling with delight after having sent half the team back to pavilion with just 99 runs on the board. Oblivious of the storm that was heading in their direction slowly but stealthily as Morgan had different plans.

He flexed his muscles and started cutting loose. He smashed two fours and two sixes and collected 21 runs off the 14 the over bowled by Gopal. The next over saw Russell changing his gears. The West Indian hit Archer for a six and a four.

The carnage continued as in the 19th over, Morgan soldiered on and smashed his England team-mate Stokes to all corners of the park. 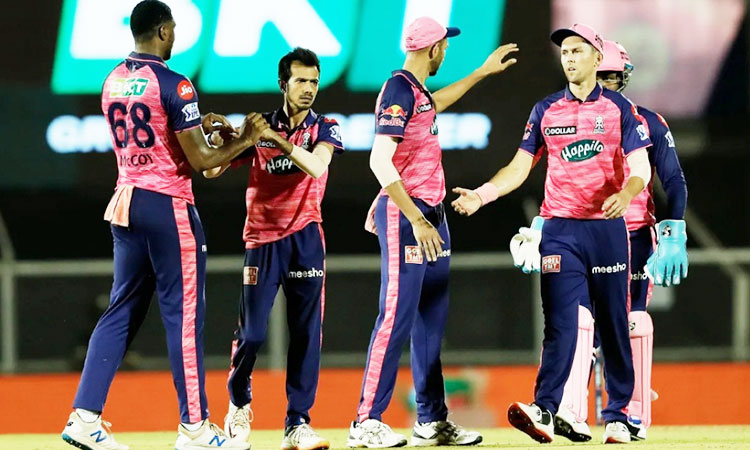