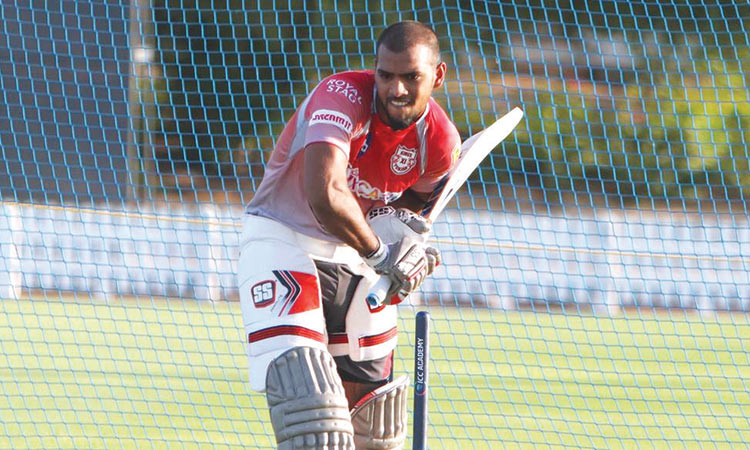 KXIP’s Nicholas Pooran bats in nets ahead of their IPL match against RR. Courtesy: Twitter


Kings XI Punjab (KXIP) will look to add to their winning momentum and boost their chances of making it to the play-offs when they take on Rajasthan Royals (RR) in a crucial IPL clash on Friday.

With the race for the last-four wide open, there is still a lot to play for -- for both teams -- and the match will have great ramifications on where both these teams will finish this season. A loss for Rajasthan will rule them out of the competition, while Punjab’s hopes of finishing in the top-four will be severely dented if they lose.

Punjab, who have never won an IPL title before, are coming into the match on the back of five consecutive wins, which has revived their campaign and made them one of the serious contenders for the title.

After a dismal start to the tournament, which at one time saw them at the bottom of the standings, Punjab seem to be peaking at the right time.

Ever since the swashbuckling West Indian batsman Chris Gayle joined the team, their batting line-up has been boosted and they have become an unbeatable force.

Gayle’s whirlwind 29-ball 52 saw them emerge victorious over Kolkata Knight Riders (KKR). He then tilted the match against Mumbai Indians (MI) by hitting a six off the first ball of the second Super Over, when the first Super Over failed to break the stalemate. With Gayle in the team, KXIP have not lost a game.

Moreover, captain KL Rahul is the highest scorer in the tournament with more than 500 plus runs under his belt. He has already hit one century and five fifties. Mayank Agarwal was also in stupendous form before an injury kept him out of the last few matches.

In the absence of Agarwal, Mandeep Singh made the best use of his chance and smashed a match-winning fifty, thus giving Rahul more options in the batting.

Nicholas Pooran also exhibited his batting skills against Delhi, taking the game away from the then table toppers with a blazing knock.

In bowling, their pace spearhead Mohammad Shami is one of the tournament’s leading wicket-takers. He bowled an excellent Super Over and pegged down Mumbai to a paltry 5 runs in the first Super Over to force the second one.

Arshdeep Singh and Chris Jordan, bowling a tight line and length, choked Sunrisers Hyderabad batsmen who lost seven wickets in the space of 14 runs, with the duo claiming three wickets each as Punjab pulled off an improbable come-from-behind victory.

The best thing for Punjab has been that in all their matches, every time a different player stepped up and took them over the line. It has been a collective team effort.

On the other hand, Rajasthan still have a very feeble chance of making it to the last four and their hopes are literally hanging on a thread.

Rajasthan have been a little unpredictable and inconsistent throughout the tournament. They have just two wins in their last five matches. They have not done the double over Kings XI since 2013, and Anil Kumble’s side would want to make sure that stat will not be repeated.

Ben Stokes heralded his return to form with a blitzkrieg of a century against Mumbai while single-handedly steering Rajasthan to victory as they chased down Mumbai’s huge target of 195 with ease.

Sanju Samson is the leading run scorer for them at the moment, amassing 326 runs after 12 games. The wicketkeeper-batsman got a match-winning fifty in his previous game but that was his first 50+ score since the opening week of the competition.

Samson has blown hot and cold this season, but nevertheless Punjab’s bowlers would be treading carefully while bowling to him.

Jofra Archer has been Rajasthan’s leading wicket-taker with 17 scalps to his name. Like Shami, the English pacer too has enjoyed the role of being a senior bowler, picking up crucial wickets whenever he has been called upon to bowl. The pitches in the UAE seem to be suiting his pace and bounce, and Punjab’s batsmen will be watchful for Archer come Friday.