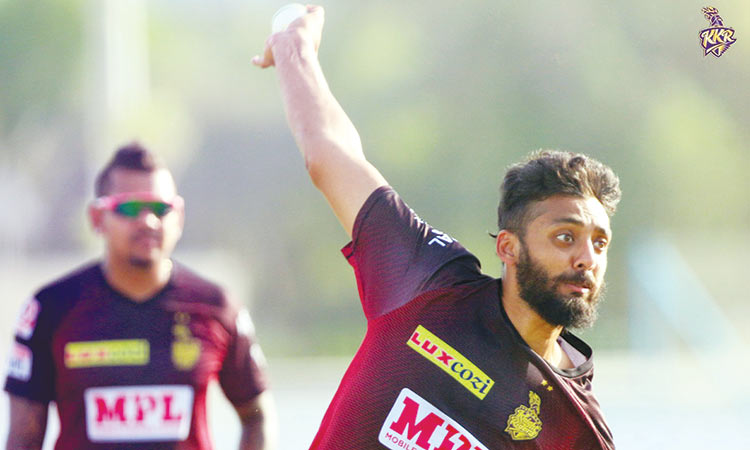 KKR’s Varun Chakravarthy and Sunil Narine attend a training session ahead of their IPL match against CSK.


An unpredictable Kolkata Knight Riders (KKR) will bid to close in on a play-off berth with a victory over stragglers Chennai Super Kings (CSK) in their Indian Premier League (IPL) match on Thursday.

Kolkata slipped to the fifth spot after losing their last match against Kings XI Punjab (KXIP) by eight wickets due to an inferior run rate.

Kolkata have been inconsistent throughout the season and would need to put up their best performance to bring their stuttering campaign back on track against CSK, who are out of contention for the knockouts but can well play spoilsport.

Barring opener Shubman Gill and Eoin Morgan, the rest of the KKR side collapsed like a pack of cards against Punjab. Nitish Rana, Rahul Tripathi and Dinesh Karthik have clicked on a few occasions but failed many more times.

They all need to shrug off their rustiness with the bat. Of all the batsmen, Karthik has been the most inconsistent and was forced to concede the team’s captaincy to Morgan in the middle of the tournament in order to focus on his batting after a series of failures.

However, the move has not changed anything, neither Karthik’s form nor the fate of Kolkata. He has scored 148 runs in 12 innings at an average of 13.45 with the help of a lone fifty, His highest score of 58 means in 11 innings he has amassed just 90 runs.

Tripathi has played only one-match-winning knock while Rana was also among the runs only on two occasions in their respective 11 outings.

KKR’s pacers have also failed to impress. Their most expensive player Pat Cummins has taken only six wickets in 12 games and has been hugely disappointing so far. Kiwi quick Lockie Ferguson too failed to produce any match-winning performance.

Mystery spinner Varun Chakravarthy has been Kolkata’s most lethal weapon this year. He became the only player to take a five-wicket haul in a single match during the course of this edition of the tournament.

The wily spinner triggered a dramatic Sunrisers Hyderabad slide as Kolkata successfully defended their paltry total of 127. Hyderabad lost their last seven wickets for a mere 14 runs. Kolkata would bank on him to deliver against Chennai as well.

Meanwhile, Chennai will play to salvage some pride with a win. They have nothing to lose, which makes them a very dangerous proposition.

Chennai, who have been let down by both batsmen and bowlers, have been experimenting in their previous two games by trying out their bench strength.

Ruturaj Gaikwad finally found form in their previous match and anchored the Chennai innings against Royal Challengers Bangalore (RCB). Their bowling was clinical against Bangalore as they kept their in-form batters under check.

Barring Monu Kumar, who made his debut for Chennai on Sunday, the other bowlers -- Deepak Chahar, Shardul Thakur, Sam Curran and Mitchell Santner were economical as they captured wickets at regular intervals. They would hope to start from where they left against Bangalore.

In the last head-to-head meeting between Chennai and Kolkata, the latter managed to eke out a narrow 10-run win against their opponents.