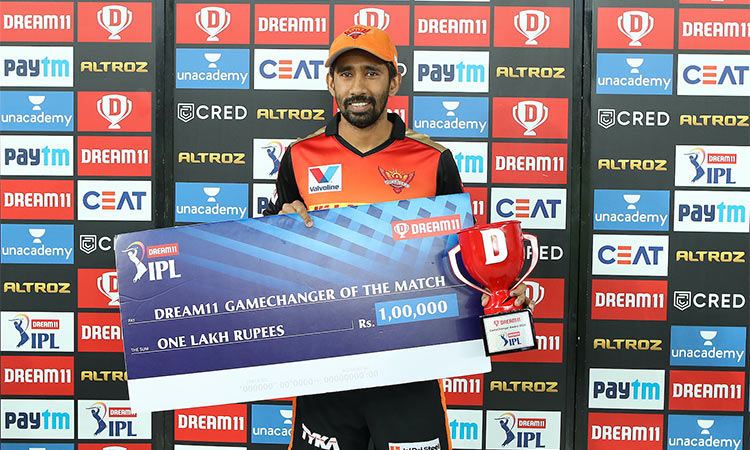 Wriddhiman Saha poses with his prize after SRH's game against Delhi Capitals on Tuesday. Courtesy: Twitter

Rashid ripped through the Delhi’s batting line-up as Hyderabad bundled out a lacklustre Delhi for 131 after posting a mammoth total of 219/2. After suffering the third loss on a trot, Delhi slipped to the third spot with 14 points while Hyderabad moved to sixth with 10 points to bolster their hopes.

If they go on to win their remaining two matches, they can be one of the strongest contenders for a play-offs berth as run rate might play an important role. And Hyderabad’s run rate is better than that of closest rivals Kolkata Knight Riders (KKR) and Kings XI Punjab (KXIP).

Meanwhile, Delhi once again stuttered in their chase. Their biggest problem seems to the opening partnership. It is fourth time in five matches that either of their openers failed to get off the mark.

Delhi lost Shikhar Dhawan (0) with just one run on the board. Shimron Hetmyer and Rishab Pant showed a brief resistance with a 40-run stand for the third wicket.

Rashid broke the partnership by getting rid of Hetmyer. He accounted for the dismissals of Ajinkya Rahane and Axar Patel as well to return with most economical figure of the season, conceding just seven runs in his four overs. After that Delhi kept on losing the wickets on regular intervals and could manage to muster only 131 runs.

Earlier, Saha, playing in his second match of the season, was promoted to open the innings with Warner in the absence of Jonny Bairstow, who was omitted for undisclosed reasons.

He pounced on the opportunity and laid down a solid foundation for a huge total with Warner. Both the batsmen made their intent clear right from the beginning.

Saha flexed his muscles as early as second over, hitting Kagiso Rabada for two successive four to collect 15 from the overs.

Ashwin was brought into the attack to bowl the third over of innings. Warner welcomed the ace spinner with a six before Saha drove him for a boundary to take 13 runs off the over.

In the sixth over, Warner plundered Rabada for a whopping 22 runs with the help of four fours and one six as Rajasthan reached 77 for no loss at the end of the power-play. The highest score by any team in the power play this season.

The duo added 107 runs for the first wicket in just ten over to set the tone for a mammoth total. Ashwin brought a temporary respite to the Delhi’s camp by getting rid of Warner.

Warner, who was caught by Axar Patel, brought up his fifty with a boundary off just 25 deliveries. His innings was studded with eight fours and two sixes.

After his departure, Saha was joined by Manish Pandey in the middle. Saha and Pandey shared a 63-run partnership for the second wicket in just four overs, taking the score 170/2 in 14.2 overs.

Saha raced to his fifty with boundary off Dehpande in 26 deliveries. He hit 14 boundaries and two sixes during his stint at the crease.