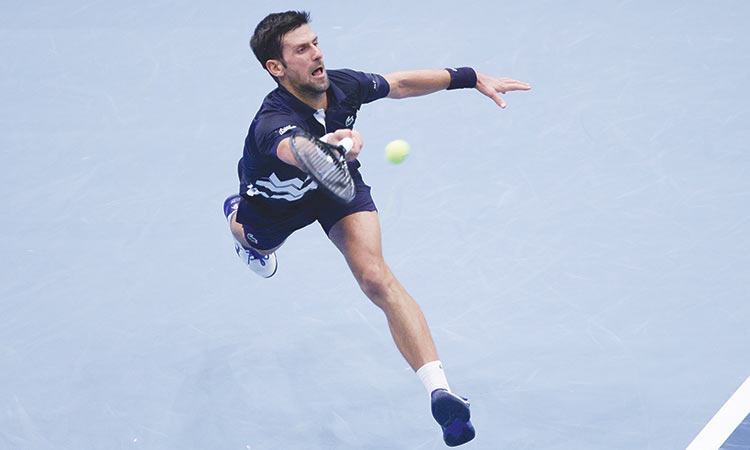 Novak Djokovic in action against Filip Krajinovic during their first round match of the Erste Bank Open in Vienna on Tuesday. Reuters

VIENNA: Serbian World No.1 Novak Djokovic secured a 7-6, 6-3 victory over compatriot Filip Krajinovic in the first round of the Erste Bank Open in Vienna, Austria, on Tuesday.

With the first set going into a tie-break after each player had broken his opponent’s serve, Djokovic prevailed 8-6.

In the second set, Djokovic got an early break and then went on to win the set 6-3 and the match top advance into the second round.

The top seed took an hour and 58 minutes to win his first match in Vienna since lifting the trophy 13 years ago. It could be a memorable week for Djokovic, who is aiming to add enough points to his total to clinch the ATP’s year-end No. 1 ranking for a sixth time, which would tie Pete Sampras for the all-time record.

Also, Britain’s Daniel Evans moved into the next round after his opponent, Solvenia’s Aljaz Bedene, retired hurt in their match when the score was 6-3, 4-5 in Evans’ favour.

Rodionov, who received a wild-card entry into the tournament, had just one previous win in eight career ATP Tour matches. He topped France’s Jeremy Chardy in the first round of the French Open last month.

On Monday, he took advantage of three of his four break-point opportunities and was aided by Shapovalov’s 10 double faults.

Meanwhile, at the Astana Open, eighth-seeded Jordan Thompson saved a match and survived his first-round match at Nur-Sultan, Kazakhstan. The Australian came from behind to beat Great Britain’s Cameron Norrie 5-7, 7-6 (6), 6-2.

Norrie led 6-5 in the second-set tiebreaker, but Thompson took the next three points to level the match. Thompson recorded the only two service breaks in the final set to escape with the win.