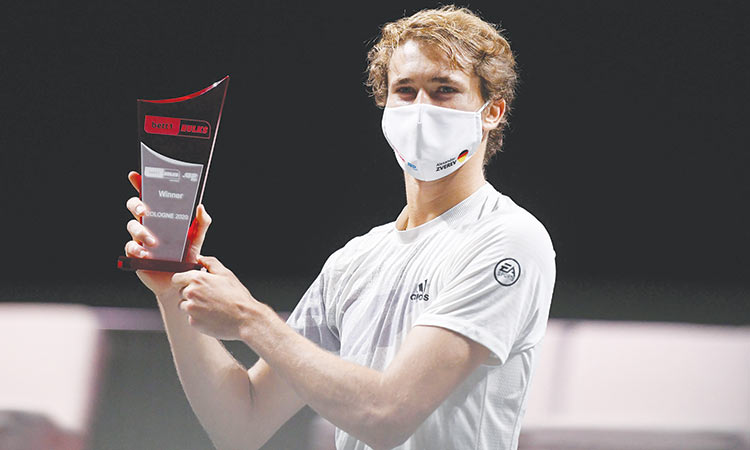 Alexander Zverev celebrates with the trophy after winning the final match of the Bett1Hulks Championships in Cologne on Sunday. Reuters

Cologne: Top seed Alexander Zverev won his second ATP title in Cologne in the space of a week with a quick-fire 6-2, 6-1 demolition of Argentine Diego Schwartzman in the final of the bett1HULKS Championship on Sunday.

The German world number seven had claimed his first ATP crown of the year by besting Canada’s Felix Auger-Aliassime 6-3, 6-3 to win the bett1HULKS Indoor title at the same venue last Sunday.

Zverev, this year’s US Open runner-up, sent down nine aces and won an incredible 83% of his first serve points as he cruised through the clash with 28-year-old second seed Schwartzman in 71 minutes without being broken.

Schwartzman, the world number nine, had beaten Zverev in two of their three previous meetings but looked strangely out of his depth in the final, winning 60% of his first serves and just 23% of his second serves while making five double faults.

Zverev broke the Argentine to go 3-2 up in the first set and never looked back, breaking his hapless opponent four more times during the course of the match.

The 22-year-old, who also won the Auckland Open in January, raced through the opening set before taking a second-set tie-break to win 6-1, 7-6 (7/4). Humbert had saved four match points to beat Britain’s Dan Evans in the semi-finals on Saturday.

“It was great to win against Evans yesterday with four match points (saved). I don’t know what happened today (Sunday), it was a really nice level, a great match.”

Eighth seed De Minaur, who reached this year’s US Open quarter-finals, is without an ATP title since September 2019.

Humbert is set to rise from 38th in the world rankings to number 32, boosting his chances of being seeded at Grand Slam tournaments next year.

Djokovic eyes record : Novak Djokovic said it will be “amazing” to equal childhood idol Pete Sampras’s all-time record of ending the year as world number one on six occasions.

Djokovic will make sure he matches the great American by winning two matches at this week’s Vienna ATP tournament.

Sampras achieved the feat six years in succession between 1993 and 1998.

“Sampras was my childhood idol growing up and it will be amazing to tie his record by being the year-end world number one six time,” Djokovic told a news conference on Sunday.

Djokovic has another target -- beating Federer’s all-time best of 310 weeks spent on top of the rankings.

On Monday, Djokovic will begin his 292nd week in total as world number one.