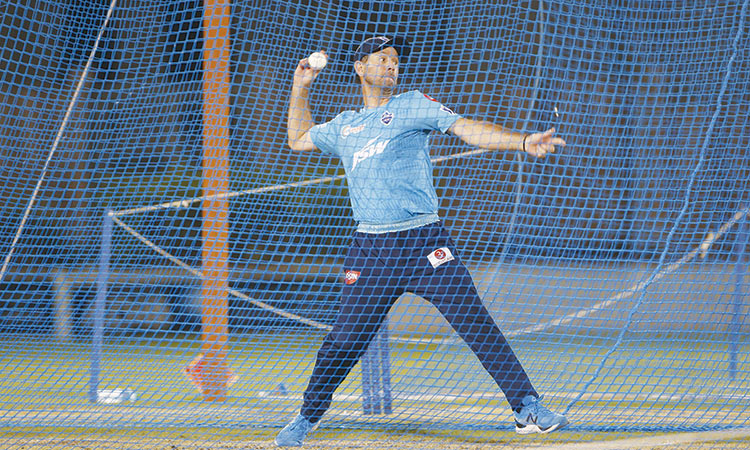 A Delhi Capitals practice session under way on Monday, ahead of their IPL match against Sun Risers Hyderabad. Courtesy: Twitter

Delhi have slipped to the second spot after two back-to-back losses against Kings XI Punjab and Kolkata Knight Riders.

One positive thing for Delhi is that they are playing Hyderabad at their favourite hunting ground in Dubai. Their pace spearhead Kagiso Rabada had ruled out their loss against Punjab to be a wake-up call, casually playing it down by calling it as part and parcel of the game.

However, with two consecutive losses, Delhi’s morale is bound to have suffered a dent, and they would look to bring their stuttering campaign back on track.

Delhi lost the match against Kolkata despite a century from Shikhar Dhawan who marked his return to form with back-to-back centuries.

He also became the second highest scorer behind KXIP captain KL Rahul with 400 plus runs. But Delhi’s other batsmen failed to capitalise on Dhawan’s heroics, instead throwing away their wickets with reckless shots, which saw Delhi fall short by around 20 runs despite having five wickets in hand.

Delhi’s main problem is their batting. Most of their batting revolves around Shreyas Iyer and Dhawan. Prithvi Shaw has been dropped from the playing XI after scoring one run in three innings, which included two golden ducks.

Ajinkya Rahane, who was brought into his place in the last match, also failed to open his account. They will have to look for somebody who can lay a solid foundation with Dhawan.

Down the order, hitters like Shimron Hetmyer and Marcus Stoinis can play big strokes to spur the run rate if they have wickets in hand.

Delhi have unarguably one of the best bowling attacks. The South African pace duo of Kagiso Rabada, who is the leading wicket-taker in the tournament this year, and his compatriot Anrich Nortje, can rip through any batting line-up in the world.

Nortje recently broke the record for the fastest ball in the history of IPL, clocking 157km/hr against Rajasthan Royals. They are complemented by spinners Ravichandran Ashwin and Axar Patel.

On the other hand, Hyderabad are second from bottom with just eight points. They need to win all their games to remain afloat in the tournament.

But their batting too, like that of Delhi, has been a major concern. They have a fragile middle-order. Their whole batting depends on Bairstow, David Warner and Manish Pandey in the absence of senior campaigner New Zealand’s Kane Williamson, who did not play in the last two matches because of injury.

Hyderabad suffered a morale-denting blow against Punjab after they failed to chase down a paltry total of 127, despite Warner and Bairstow setting the tone with an opening stand of 56 runs.

Hyderabad lost 10 wickets for 58 runs, seven of them within a span of just 15 runs as Chris Jordan and Arshdeep Singh claimed three wickets each for Punjab. Both were brought into the squad as replacements.

They have a good bowling attack though, spearheaded by Afghanistan’s Rashid Khan. Jason Holder had a positive affect on the team in his first match as he took three wickets and effected a run-out. But in his second game against Punjab, he too failed to deliver.

So in a crunch clash, Delhi look favourites against a depleted Hyderabad.