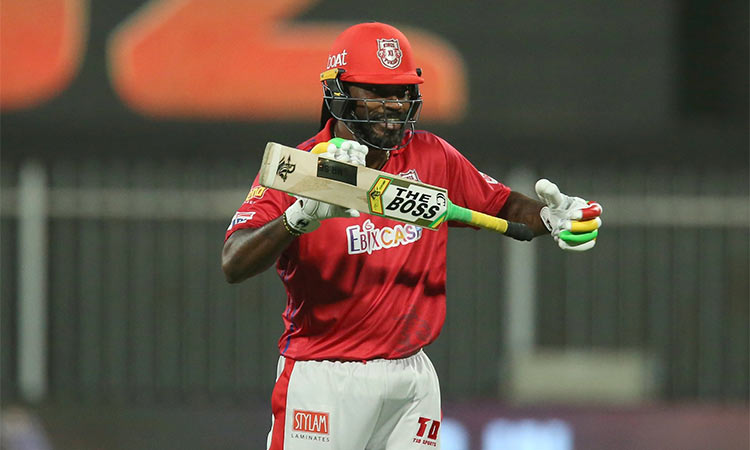 Riding on Mohammad Shami’s 3-35, Punjab restricted Kolkata to 149/9, and overhauled the target for the loss two wickets with seven balls to spare.

Punjab’s miraculous resurrection saw them move to the fourth spot in the standing from the bottom with the fifth victory on a trot.

Gayle was well supported by Mandeep Singh, who played a perfect foil with a sedate 56-ball 66.  Chasing, Punjab were off to a decent start as Mandep and captain KL Rahul added 47 runs for the first wicket to set the tone for a successful chase.

After the dismissal of Rahul and in the absence of Mayank Agarawal, Kolkata tried to mount pressure with mystery spinner Prasidh Krishna and Varun Chakravarthy bowling in tandem.

But Gayle had different plans. The Universal Boss lived up to his reputation and lighted up the Dubai Stadium with some real firework.

He did not let the Kolkata bowlers to succeed in their plans of mounting the pressure by choking the flow of runs. Gayle tore apart the six-pronged bowling attack and shared a 100-run stand for the second wicket with Mandeep in  just 10 overs to Punjab to 147/2 in 18 overs.

When Gayle was dismissed, Punjab needed just three runs to win in two overs with eight wickets in hands. His innings was studded with five huge sixes and two boundaries. Mandeep and Nicholas Pooran took them over the line.

Earlier, Mohammad Shami ripped through the top-order as Kolkata got off to a nightmarish start. Rahul’s ploy of deploying the spinner in the first over paid dividend as Maxwell triggered the slide with dismissal of Nitish Rana, who got out for golden duck. While trying to sweep Maxwell, all Rana could manage  was to topped-edged the delivery and Gayle completed a clean catch.

In the next over, Shami got rid of Rahul Tripathi, who played just one match-wining knock in 10 innings. Tripathi holed out to Rahul as Kolkata lost their second wicket with just 10 runs on the board.

Dinesh Karthik came out in the middle with the responsibility of steadying the ship. But he could survive for just two deliveries. Shami had him caught by Rahul behind the stumps off a length delivery, which was pitched just outside the off stump.

Karthik had conceded the captaincy to Eoin Morgan in the middle of the tournament to focus on batting after a series of failures.

But it changed nothing, neither the fate of Kolkata nor Karthik. He has scored 148 runs in 12 innings at an average of 13.45 with the help of lone fifty. His highest being 58, which means in 11 innings he has amassed just 90 runs.

On one end, Shubman Gill was holding the fort. He along with Morgan shared an 81-run stand for the fourth wicket to take the score to 91-4 in 10 overs.Morgan did not let the run rate drop down as he hit a quick-fire 25-ball 40 with the help of five boundaries and two sixes. 80 per cent of his runs came in boundaries. Gill also scored a fifty.