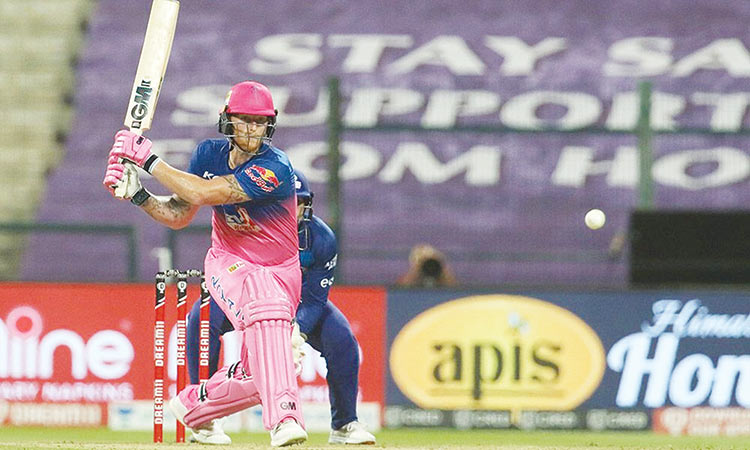 RR’s Ben Stokes plays a shot against MI during their IPL match on Sunday. Courtesy: Twitter

With the thumping victory, Rajasthan not only kept their play-offs hopes alive but also shattered the dreams of Chennai Super Kings (CSK) of reaching the last four either mathematically or virtually.

Rajasthan moved to the sixth spot and are tied with Kings XI Punjab (KXIP), who are one better, with the same number of points in their kitty.

Stokes and Sanju Samson made light work of the huge target of 196 set up by Mumbai as Rajasthan knocked down the winning run for the loss of just two wickets with 10 balls to spare.

The duo shared an unbeaten stand of 152 runs for the third wicket as Mumbai bowlers were reduced to mere cannon fodder. After Robin Uthappa was dismissed cheaply as usual, Stokes took the responsibility of leading from the front.

He added 31 runs for the second wicket with Steve Smith before the latter was bowled by James Pattinson. Stokes and Samson knuckled down to revive the innings and after that there was no looking back. They kept the hapless bowlers of Mumbai at bay, and plundered them.

Stokes’ innings was studded with 14 boundaries and two sixes while Samson hit three sixes and four fours in his unbeaten 31-ball 54.

Earlier, Mumbai lost their first wicket with just seven runs on the board when Archer rattled the stumps of Quinton De Kock to give Rajasthan their first breakthrough. Ishan Kishan shared a 77-run stand with Surya Kumar Yadav for the second wicket to anchor the innings.

The duo took the score to 90 in 10.4 overs before Karthik Tyagi got rid of Kishan to make it 90/2. Mumbai lost the two wickets in quick succession as Yadav was dismissed by Archer in the next over and Kieron Pollrad’s timbers were dispersed by Shreyas Gopal as Mumbai were reduced to 101/4 in 12 overs. With Rohit Sharma not playing, Mumbia needed someone to play a big innings and score at good pace. Hardik Pandya came out in the middle with a different mindset.

He smashed a whopping seven sixes and two fours in his 21-ball 60 to propel Mumbai to a fighting total of 195/5. Riding on Hardik’s carnage Mumbai milked 79 runs off the last five overs.

He got off to a slow start and was dropped by Rahul Tewatia in the 16th over when he was six off seven balls. He capitalised on the reprieve and went on to smack an unbeaten fifty. Saurabh Tiwary smashed 17 runs in the next over after which Hardik took off. He hit four sixes in the 18th over bowled by Ankit Rajpoot and the over produced 27 runs.  Tyagi bowled the last over in which Pandya hit three more sixes and two fours, collecting another over for 27 runs to propel Mumbai’s total.

BCCI announce IPL playoff schedule, Dubai to host final: Dubai will host the final of the 2020 season of the IPL as the Board of Control for Cricket in India (BCCI) on Sunday announced the schedule for the playoffs and the title clash.

Dubai will host the first qualifier on Nov.5 after which the eliminator and second qualifier will be played in Abu Dhabi on Nov.6 and Nov.8 respectively. The final will be played on Nov.10. All matches have been scheduled for a 7.30 pm (6pm UAE time)

Meanwhile, the Women’s T20 Challenge will be played from Nov. 4 to Nov.9 in Sharjah. The Supernovas, Velocity and Trailblazers will play three matches in the round-robin stage before the final on Nov.4, 5 and 7.

While the first and third matches along with the final have been scheduled to start at 7.30 pm (6pm UAE Time) , the second match between Velocity and Trailblazers is set for a 3.30 pm (2pm UAE time).