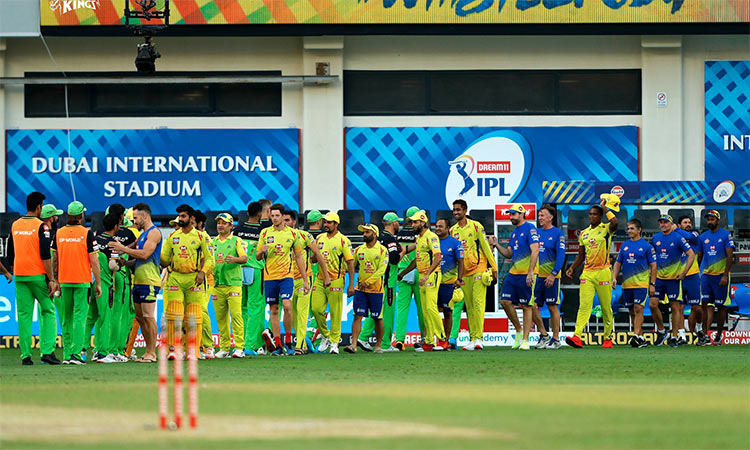 CSK and RCB units seen at the end of their IPL match in Dubai on Sunday. Courtesy: Twitter

Chasing 147 to win the match, Chennai were off to a good start as Faf du Plessis and Gaikwad added a quickfire 46 for the first wicket. Du Plessis hit a six and a four off Chris Morris in the second over. Gaikwad then hit a six over long-off in the next over bowled by Washington Sundar.

Mohammed Siraj, who had bowled a historic spell against Kolkata in the previous match where he broke many world record, was brought into the attack in the fourth over and the Chennai openers went after him, teaming up to hit two fours and a six.

The duo took the score to 46 at the end of five overs to lay down the foundation for a successful chase. Morris broke the partnership in the sixth over to give Bangalore the first break through. He had Du Plessis caught by Siraj.

Ambati Rayudu joined Gaikwad in the middle and the duo made sure that Chennai continue to keep the scoreboard ticking. Rayudu made his intent clear from the beginning he hit two fours and a six in the ninth and tenth overs while Gaikwad smashed one more six as Chennai moved past 80.

The duo played watchfully and made sure that they don’t lose any wicket, which could trigger another batting collapse. A couple of overs later, the pair completed a 50-run partnership and pushed Chennai past hundred.

Gaikwad brought up his maiden fifty of the tournament, before the partnership was broken in the 14th over as Yuzvendra Chahal got rid of Rayudu. But it was too late and damage was done. MS Dhoni and Gaikwad took Chennai over the line with eight balls to spare.

Earlier, Aaron Finch gave a fluent start as the right-hander hit two fours off Deepak Chahar in the first over and followed it up with one more in the second over bowled by Monu Kumar Singh. Devdutt Padikkal smashed another six in the third over to put the pressure on the Chennai bowlers.

Curran gave Chennai their first breakthrough as he got rid of Finch. Bangalore reached 46/1 in the power play, they lost their second wicket in the next over after du Plessis and Gaikwad pulled off an excellent relay catch near long-on. AB de Villiers and Virat Kohli were in the middle to steady the ship.

The two continued to keep the scoreboard ticking, hitting occasional boundaries and brought up the fifty-run stand in the 14th over.

The 68-ball 82-run stand was broken when de Villiers, who scored a 36-ball 39, holed out to du Plessis off Chahar at long on. Kohli brought up a sedate third half-century of the season off 41 balls.

Bangalore brought in Moeen Ali in place of Isuru Udana while Chennai made two changes as Mitchell Santer and Monu Kumar Singh, who made his IPL debut, replaced Josh Hazlewood and Shardul Thakur in the playing XI respectively.