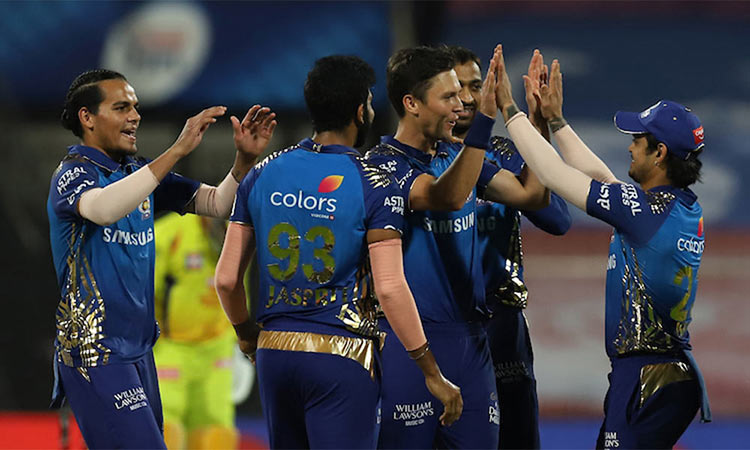 Mumbai Indians players celebrate fall of a wicket during their IPL match against Chennai Super Kings in Sharjah on Friday. Courtesy-Twitter

Quinton de Kock and Ishan Kishan stitched an unbeaten partnership of 116 runs to help MI get across the line, after the side was handed a paltry target of 115 runs.

Kishan smashed 68* off 37 deliveries, with De Kock accumulating 46 runs off the same number of balls. Earlier, CSK finished with a total of 114 runs for the loss of nine wickets.

Earlier, Sam Curran's 52 pulled a listless Chennai Super Kings to 114 for the loss of nine wickets as they struggled to keep up with Mumbai Indians' bowlers led by a clinical Trent Boult.

Boult recorded figures of 4/18. CSK made some big changes to their batting order, dropping Shane Watson and demoting Curran back to the lower order. Ruturaj Gaykwad was sent out to open the innings with Faf du Plessis and the 23-year-old was bowled for a duck by Boult in the first over. Boult finished the innings with the wicket of Curran at the Sharjah Cricket Stadium.

Jasprit Bumrah dismissed Ambati Rayudu and N Jagadeesan in the next over after which Boult sent back du Plessis in the third and CSK found themselves 3/4.

Dhoni and Ravindra Jadeja tried to provide some stability but the latter was dismissed in the last over of the powerplay. Dhoni fell in the seventh over, which meant that CSK had lost their top six batsmen for just 30 runs.

The most prominent partnerships for CSK came only for the eighth and nine wickets with Shardul Thakur and Imran Tahir providing good assistance to Curran. Curran was eventually bowled off the last ball of the innings. 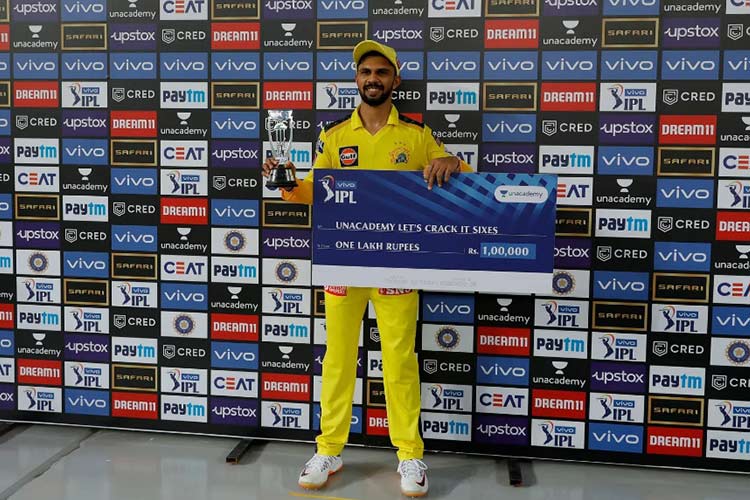 Ruturaj Gaikwad’s gritty unbeaten fifty coupled with a blitzkrieg cameo of Dwayne Bravo helped Chennai set up a 20-run victory over Mumbai Indians in the first match of the second leg of the IPL in Dubai on Sunday.