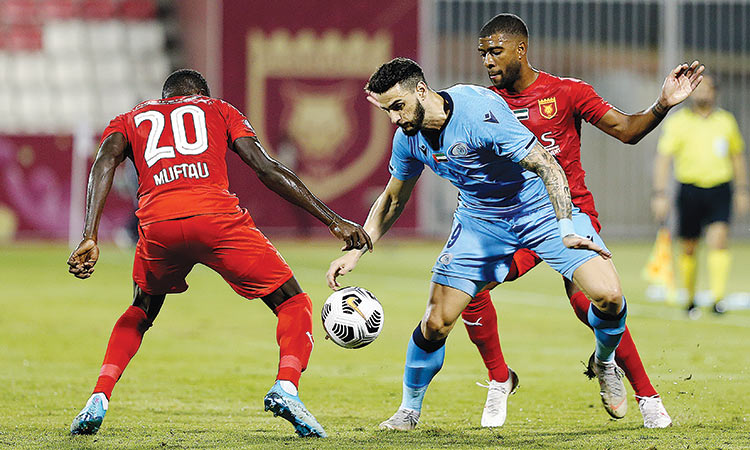 Action during a matchweek 2 AGL game between Bani Yas and Fujairah at the Fujairah Stadium on Thursday.

Bani Yas came from behind to earn a 3-1 win over Fujairah at Fujairah Stadium in matchweek 2 of the Arabian Gulf League on Thursday.

Although Bani Yas looked more organized in the early moments of the game, it was Fujairah who took the lead in the 13th minute. The hosts were awarded a penalty and Kristiano Samuel netted from the spot to hand his side a 1-0 lead.

Fujairah had a chance to double their lead midway through the first half, but Farley Rosa’s effort went wide.

The Sky Blues made a strong comeback in the second half and scored two quick-fired goals. Six minutes after the restart, Bani Yas levelled the scoreline. A defense-splitting through pass from Sultan Al Shamsi found Nicolas Gimenez inside the box who easily converted the ball into the back of the net.

Only three minutes later, second-half substitute John Tibar’s cross found Joao Pedro inside the box, who headed the ball home to put the guests 2-1 up.

Joao Pedro completed his brace with 18 minutes to go, as he fired the ball from a tight angle leaving Fujairah keeper helpless and sealing a 3-1 win for his side.

This marked Bani Yas’ second win in a row, as they now top the standings with six points. Meanwhile, Al Dhafra remain winless with zero points.

Fujairah will next face Al Dhafra, while Bani Yas will play against Khorfakkan.

The game got off to a fiery start, as only three minutes after kick-off, Al Wasl were reduced to 10 men. Salem Al Azizi was sent off for a dangerous play against Hatta’s Braian Ramirez.

Despite the numerical disadvantage, the guests took the lead on the 10-minute mark. Ronaldo Mendes’ cross found Fabio Lima inside the box, and the latter chested the ball down, dribbled past Hatta’s defender and slotted home to put Al Wasl 1-0 up.

On the half-hour mark, Hatta missed an opportunity to make it 1-1, when Ramirez went one-on-one with Al Wasl keeper Humaid Abdulla, before he was intercepted by Al Wasl’s Hassan Ibrahim who converted the ball into a corner.

Abdulla then parried the ball away off the corner kick to maintain his side’s lead.

However, Hatta eventually found the equalizer. After a VAR review, the guests were awarded a penalty eight minutes before halftime for a foul inside the box. Abdullah Abdulqader fired from the spot to level the scoreline ahead of the break.

Al Wasl regained their lead 10 minutes after the restart, as Ronaldo Mendes converted a freekick from the edge of the box into the back of the net.

In the 68th minute, Saeed Jassem headed the ball home off a cross from Ramirez to make it 2-2.

In the dying minutes of the game, Al Wasl’s Hueglo Neris netted two quick-fired goals to snatch his side a 4-2 win. He headed the ball home off a corner kick in the 86th minute, before netting again two minutes later in what was almost a carbon copy of his first goal.

Al Wasl earned their first win of the season and have three points, while Hatta remain at the bottom with no points.

Hatta will next face Ajman away from home, while Al Wasl will host Al Nasr. 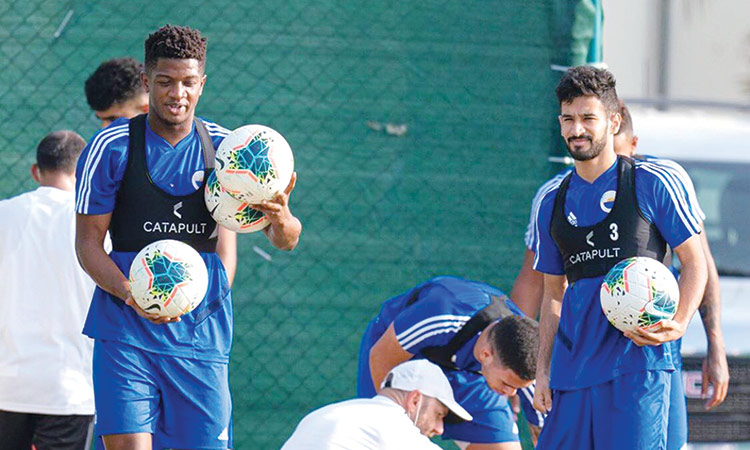