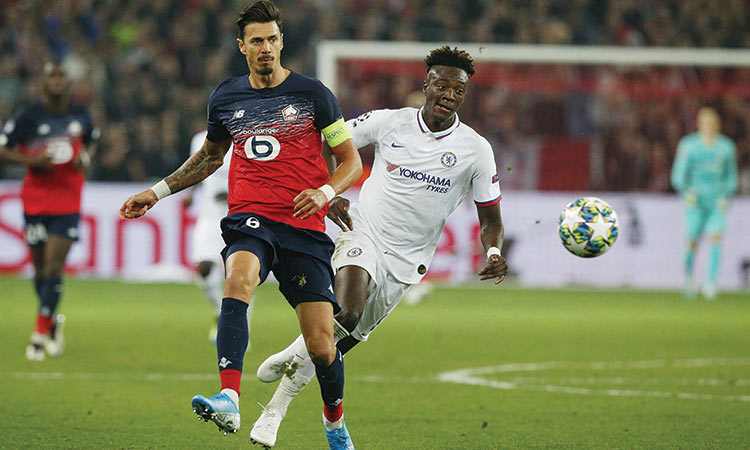 The 2011 French champions are unbeaten so far this season and captain Jose Fonte leads the league’s best defense with only two goals conceded in seven games.

“Everyone knows PSG’s the champion, they have world class players. But Lille has the capacity to beat them,” Fonte said. “But over 38 games we need to be consistent. I want to motivate my team-mates to surpass themselves. We’ll see what we’re capable of.”

Lille leads defending champion PSG by two points at the top of the standings. The team next plays at Nice on Sunday, while PSG hosts Dijon on Saturday.

Few would have expected Lille to be in such a strong position, especially after selling striker Victor Osimhen to Italian club Napoli in deal worth $94.6 million with bonuses included.

The team did something similar the previous offseason when Nicolas Pepe was sold to Premier League club Arsenal for $93.4 million.

Selling such good players raised questions as to how competitive Lille wanted to be in a league where PSG’s dominance has been felt since cash-rich Qatari owner QSI bought the club nine years ago.

But after losing 1-0 to Bayern Munich in the Champions League final, a surprisingly jaded-looking PSG lost significant ground after defeats against Lens and Marseille, then narrowly avoided a humbling home draw against Metz with a last-minute winner. PSG has caught up since, winning five straight games.

Despite bringing in new players, Lille managed to grind out wins under coach Christophe Galtier, raising hopes of a first league title since coach Rudi Garcia’s double-winning side in 2011.

“This is the best Lille team I’ve played for, position by position, but we have to prove it,” said the 36-year-old Fonte, who spent 10 years in the Premier League before eventually moving to France in 2018.

Fonte helped Lille finish in second place at the end of the 2018-19 season, and he’s determined to prove that Lille can go all the way and clinch only the fourth league title the northern club’s history.

“We have experience and youth, a good mix. We have quality in every position,” he said. “Galtier is happy with the size and quality of his squad.”

Galtier made a shrewd signing in veteran Besitkas striker Burak Yilmaz, who twice finished as the top scorer in the Turkish league with Galatasaray and netted more than 200 club goals in the country.