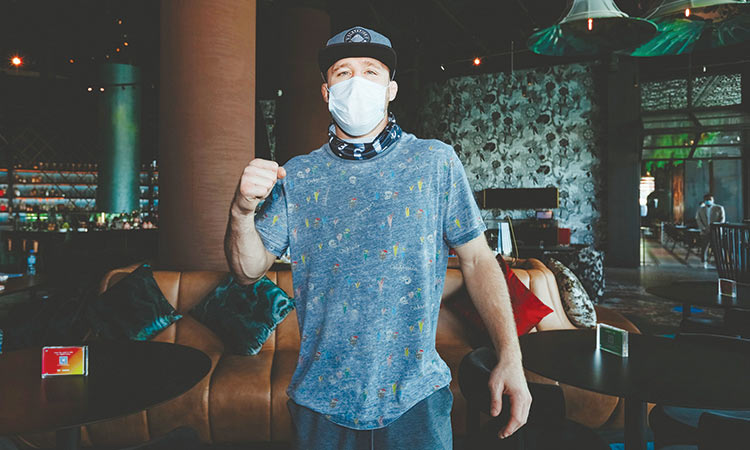 Justin Gaethje will test his mettle against Khabib Nurmagomedov at the headline bout of the season on Oct.24.

UFC lightweight champion Khabib is ready to put his unbeaten 28-win record and title on the line against Gaethje. It will be his first Octagon appearance since he defeated Dustin Poirier at UFC 242 in Abu Dhabi back in September 2019.

The Russian fighter produced a dominating display in his last Octagon appearance, defeating American opponent Poirier by submission in round three of their Abu Dhabi Showdown Week main event last year, which was also held on Yas Island. In the coming week Nurmagomedov will be hoping to continue his successful run in Abu Dhabi.

“All the time I come back here to the UAE and fighting in Abu Dhabi. For me, it’s like I’m fighting in my home. I feel great with this. This is an amazing place,” said Khabib previously

However, Gaethje has arrived in Abu Dhabi in great form following his May victory over Tony Ferguson, which saw him named interim champion in Khabib’s Octagon absence due to COVID-19 restrictions.

Return to Fight Island has already recorded a number of milestones and ensured the health and safety of more than 2,500 people housed inside the innovative UFC Fight Island safe zone bubble.

The champion vs champion bout headlines a packed UFC 254 card and provides a fitting finale to a memorable Return to Fight Island.

Saturday’s UFC 254 features 13 bouts at Flash Forum, on Yas Island. The early prelims will start at 6pm, with the main card events getting under way at 10pm.

With a win over Gaethje this Saturday at UFC 254, Khabib would not only record his third straight lightweight title defense, he’d improve his unblemished pro record to 29-0. He’s beaten a dozen UFC opponents, with dominant victories against elite fighters like Dustin Poirier, Conor McGregor, Al Iaquinta, Edson Barboza, and Rafael dos Anjos.

It’s rare for any combat sports athlete to go their entire career without a loss, but the 32-year-old Nurmagomedov plans to do just that and follow in the footsteps of legendary boxers like Rocky Marciano and McGregor nemesis Floyd Mayweather. Now it’s just a matter of finding the magic number that will be enough for Nurmagomedov to lay down his gloves for good.

Beyond the big question mark of how his fight with Gaethje will go, Nurmagomedov’s plan to go at least 30-0 is dependent on what’s next for him following another win.

“The Eagle” will have seemingly cleared out his division, though several potential matchups continue to be proposed.

McGregor has long campaigned for a rematch after losing to Nurmagomedov at UFC 229, a perpetually snake-bitten matchup with Tony Ferguson remains a possibility despite losing some of its cache with Gaethje having stopped Ferguson’s lengthy win streak, and both Nurmagomedov and UFC legend Georges St-Pierre have expressed a mutual interest in a legacy battle should “GSP” ever decide to compete again.

Nurmagomedov also recently said that UFC President Dana White has “something special” in the works for him, though neither man has gone into detail as to what that might be and Nurmagomedov expressly asked White to wait until after his fight with Gaethje to move forward with discussions.

Meanwhile, longtime Khabib training partner Islam Makhachev was supposed to face former lightweight champion Rafael dos Anjos next weekend on the main card of UFC 254. Unfortunately, dos Anjos was pulled from the card after testing positive for COVID-19 and, during the scramble to find a replacement, Khabib suggested that Tony Ferguson should fight with Islam, with his manager Ali Abdelaziz even offering to pay Ferguson $200,000, according to a MMA report.