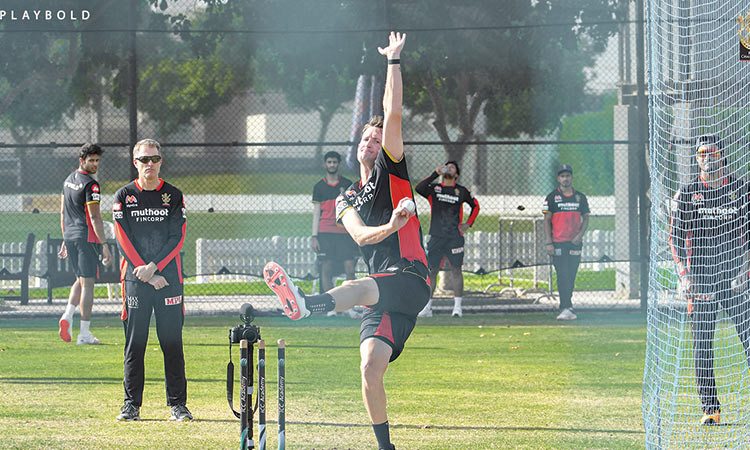 RCB players attend a training session ahead of their IPL match against KKR. Courtesy: Twitter

Kolkata Knight Riders (KKR) will have an eye both on play-off berths as well as an unstoppable AB de Villiers, when they take on Royal Challengers Bangalore (RCB) in their Indian Premier League (IPL) match on Wednesday.

Both the teams are coming into the match on the back of a win each. Bangalore and Kolkata are on third and fourth spot with 12 and 10 points respectively.

Both Kohli and De Villiers are in stupendous form and can blow away any bowling attack on a given day. In their last head-to-head meeting, Bangalore had trounced Kolkata by a huge margin of 82 runs.

De Villiers struck a 33-ball 73 to light up the Sharjah Stadium as Kohli decided to take a backseat and enjoyed the fireworks from the other end.

De Villiers once showed his brutal side as he steered Bangalore to a seven-wicket win against Rajasthan Royals with  an unbeaten 22-ball 55.

Bangalore had conceded a whopping 89 runs in just four overs against Mumbai as the match went into a Super Over after a late blitz by Kieron Pollard and Ishan Kishan.

Going by the current form, Bangalore seem to have an edge over Kolkata, who are still trying to jell after a change in leadership and Sunil Narine being reported for a suspect action.

Meanwhile, with the change in leadership, Kolkata seem to have to put their faltering campaign back on track to return to their winning ways.

Dinesh Karthik, who had been a flop with the bat, relinquished his captaincy and England’s World Cup winning captain Eoin Morgan was handed the reins of the team with the hope of bringing a turnaround in fortunes. And the strategy seems to be working fine as only in their second match after the change of captaincy, Kolkata defeated Sunrisers Hyderabad in a Super Over.

Karthik shared a 50-run stand with Morgan and scored a quick-fire 14-ball 29 after being relieved of the responsibility. That will be a huge boost for Kolkata’s batting line-up, which revolves around Morgan, Shubman Gill and Rahul Tripathi.

But Kolkata’s six-pronged bowling suffered a huge blow since the West Indian all-rounder Narine was reported for suspect action. After being reported by the on-field umpire, Kolkata had to exclude the wily spinner from the playing XI in the next two matches.

This is not the first time Narine has been reported for suspect action. Earlier also he was reported for the same, when he re-modelled his action and shifted his focus to batting as a result of which Kolkata promoted him to open the innings. But he is yet to click with the bat in this season.

Narine was reported for the same act during the Caribbean Premier League (CPL) and was left out of the squad for the final, it was reported by the West Indian media. However, Trinbago Knight Riders (TKR), a subsidiary of KKR in the Caribbean League, went on to win the title under the leadership of Kieron Pollard, who plays for Mumbai Indians at the IPL.

They will once again pin hopes on mystery spinner Varun Chakravarthy, Prasidh Krishna and Kamlesh Nagarkoti to deliver another masterclass and boost their play-off hopes.