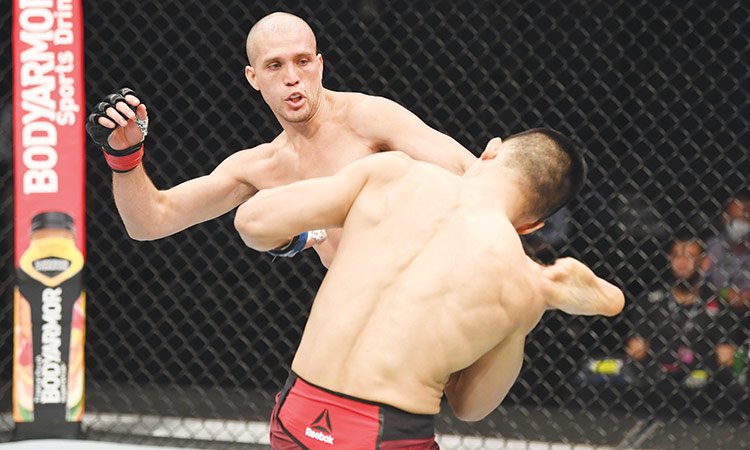 Brian Ortega and Chan Sung Jung in action during their bout on Sunday.

Brian Ortega, who had not fought for close to two years after suffering a brutal stoppage loss to Max Holloway at UFC 231 in December 2018, marked his return with a dominant victory over ‘The Korean Zombie’ Chan Sung Jung at the UFC Fight Island in Abu Dhabi.

What was billed as a grudge match ultimately played out as a lopsided five-round fight as Ortega displayed a new level of striking to beat Jung to the punch in virtually every exchange before earning a unanimous decision, according to a MM report.

The final scorecards all read 50-45 with Ortega getting the victory. “It feels good,” Ortega said after having his hand raised. “We got to work. Like everyone thought that I took some time off. No, I had surgeries, I got right back to work.

“I said I need everything new. I need to become a new guy and get better at MMA. Everything that MMA has, wrestling, striking, so today I tried to do the best I could to mix it all up and show everyone that I’m back.”

There was no ring rust to knock off because Ortega came back with a renewed sense of purpose and a whole new arsenal at his disposal as he exchanged with Jung on the feet with little fear of reprisal. Showcasing a long reach, Ortega kept the always exciting “Korean Zombie” at the end of his punches and fired a series of overhand punches including a left hand that put Jung down to the mat briefly in the opening round, the MMA report added.

Realising that his output was lower than usual, Jung started to get more aggressive as he pressed forward while throwing punches in bunches. During one exchange, Jung tagged Ortega with a strong uppercut in the middle of a combination that appeared to put the momentum in his favor.

That came to a halt in a hurry when Ortega decided to counter with a perfectly timed spinning elbow that blasted Jung flush in the jaw and sent him crashing to the canvas. Ortega quickly followed up looking for the finish but “The Korean Zombie” was able to stave off the attacks until the round came to a close.

While he’s shown incredible grappling in the past, Ortega obviously worked hard on his striking during the two years he spent away after falling to Max Holloway in 2018. Ortega showed so much diversity on the feet, chipping away at Jung with punches and kicks while mixing in more of those devastating elbows.

With five minutes remaining, Ortega was still feeding Jung a steady diet of straight jabs and then capping off his combinations with power punches. Knowing that “The Korean Zombie” needed a finish, Ortega stayed out of any major flurries while putting on a technical masterpiece over 25 minutes. There was no doubt that Ortega won the fight when the final horn sounded but it’s hard to imagine anyone predicted such a one-sided affair.

With the victory, Ortega will now look to cash in on a pre-fight promise from UFC president Dana White that the winner of the UFC Fight Island 6 main event would move onto compete for the featherweight title.

“We’re going to find out if I’m ready,” Ortega said about a second shot at UFC gold. “In this game, you take chances. You don’t grow in the comfort zone.

“Alexander Volkanovski, you’re the champ. The thought of fighting you is an excitement.”

In the co-feature, Jessica Andrade added another bonus check to her impressive collection on Saturday.

The former strawweight champion made an immediate impact on the 125-pound division as she crushed No. 1 contender Katlyn Chookagian with body shots to earn a TKO victory with five seconds remaining in the first round of the UFC Fight Island 6 co-main event. Andrade’s win earned her a $50,000 Performance of the Night bonus (and maybe a shot at flyweight champion Valentina Shevchenko), the eighth time she’s walked away with a five-figure Fight Night nod.

Also receiving a Performance of the Night bonus was light heavyweight Jimmy Crute. The Australian needed a little over two minutes to KO Modestas Bukauskas and improve to 4-1 in the UFC.

Fight of the Night honours went to debuting lightweights Mateusz Gamrot and Guram Kutateladze. It was Kutateladze who won a narrow split decision over the two-division KSW champion and though he lamented his own performance afterwards, both he and Gamrot will walk away with some extra pay.