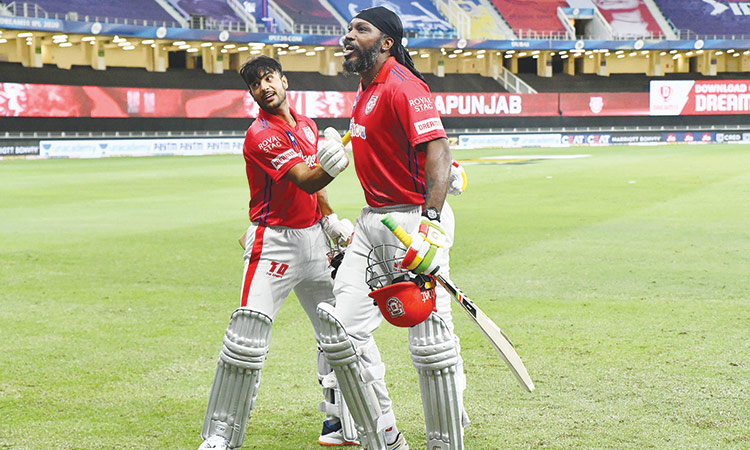 KIXP’s players Mayank Agarwal and Chris Gayle celebrate their win over MI in their IPL match in Dubai on Sunday. Courtesy: Twitter

Kings XI Punjab held their nerves to eke out the toughest win of the season with a hard-fought victory in the second Super Over of an Indian Premier League (IPL) match after the first ended in a tie in Dubai on Sunday.

The nail-biting clash between Punjab and Mumbai saw a rare of rarest finish as it was only the second occasion in the game’s history, when a Super Over could not decide the fate of a match after the 50-over World Cup final between England and New Zealand in 2019.

Riding on a lone boundary by Kieron Pollard, Mumbai set Punjab a target of 12 runs. Chasing, swashbuckling West Indian batsman Chris Gayle hit six on the first ball off Trent Boult to take Punjab closer to the target. He took a single to give the strike to Mayank Agarwal. Agarwal smashed two consecutive boundaries to seal a much-deserved victory for Punjab with two balls to spare.

Prior to that, after an eventful last over which which saw the match ending in a tie, the first Super Over also ended in a tie with both teams scoring five runs.

Punjab could manage to post only five runs, losing both their wickets. Bumrah bowled a tight over as he dismissed Pooran and Rahul both, conceding only five runs.

Now the pressure was on Punjab to defend the paltry total. Rahul entrusted an experienced Shami for the job and he lived up to the expectation. He kept both De Kock and Rohit under check and did not let them flex their arms.

Mumbai needed two off the last ball. De Kock hit it in the covers and scrambled for two runs. An Agile Rahul collected the ball and dislodged the bails to get rid of De Kock as the Super Over also ended in a tie, forcing another Super Over.

Earlier, Rahul was the mainstay of the Punjab batting as he led the chase of 177 with a fighting fifty before they stumbled in the last over. Punjab needed nine runs off the last over, but Boult did not let them go over the line as Mumbai forced a Super Over.

Earlier, a late blitz by Pollard and Nathan Coulter-Nile saw Mumbai Indians (MI) surge to a fighting total of 176/6 in their allotted 20 overs.

The duo smashed 57 runs in the death overs to take Mumbai to light up the Dubai International Stadium on Sunday.

Pollard’s 34 off 12 deliveries was studded with one four and four sixes while Coulter-Nile hit an unbeaten 24 off 12 balls with four boundaries.

Their partnership tilted the momentum on Mumbai’s side after the top order failed to fire except for opener Quinton de Kock, who set the tone for a big total.

Mumbai lost the important wickets of captain Rohit Sharma, Suryakumar Yadav and Ishan Kishan in the powerplay before de Kock and Krunal Pandya knuckled down to steady the ship.

Rohit was the first to go when Arshdeep Singh clean bowled him to give Punjab their first breakthrough. Four balls later, Mohammed Shami struck to get rid of Yadav as he had the latter caught by Ashwin to make 24-2. Yadav failed to open his account. Arshdeeep dismissed Ishan Kishan (7) to reduce Mumbai to 38-3.

Mumbai were reeling and needed someone to play a sheet anchor’s role. On the other end de Kock was standing like a pillar. He shared a 58-run stand for the fourth wicket with Krunal Pandya to take the score to 98-4. The South African was dismissed on 53 off 43 balls in the 17th over after which Pollard and Coulter-Nile took the attack to the opposition.

Mumbai kept on losing the wickets at regular intervals and were 119-6 in 16.3 overs before the duo of Pollard and Coulter-Nile took the charge in their hands.