Chennai and Rajasthan face off in must-win tie - GulfToday

Chennai and Rajasthan face off in must-win tie 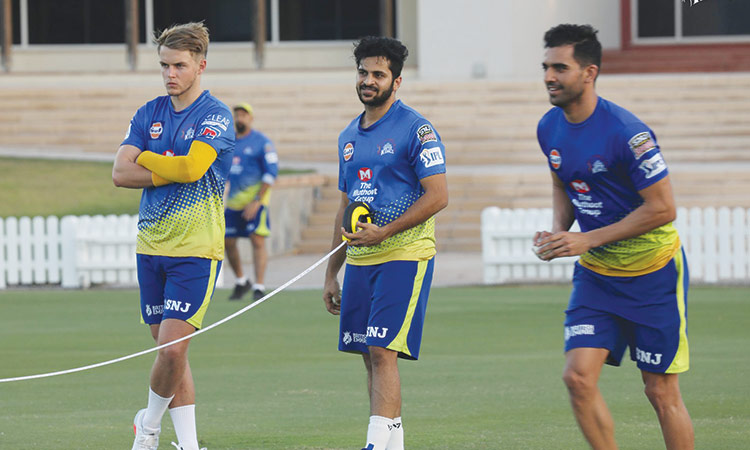 CSK’ s players attend a training session ahead of their match against RR. Courtesy: Twitter

Chennai Super Kings (CSK) and Rajasthan Royals (RR) will face off in a must-win match for both the teams to keep their play-off hopes alive in Abu Dhabi on Monday.

Both the teams are coming into the match on the back of defeats. Both Chennai and Rajasthan have six points each having played nine matches apiece in the tournament.

Their campaigns have been derailed by a string of defeats and their hopes of qualification for play-offs hangs by a thread.

Both Rajasthan and Chennai need to win their remaining matches to make it to the play-offs. Apart from that, they will have to wait for the results of other teams. Chennai lost to the table toppers Delhi Capitals (DC) in their last match. Their hopes of qualification were dealt another blow when star all-rounder Dwayne Bravo was injured and could not come to bowl the last over.

The onus of bowling the last over fell on Jadeja and he conceded a whopping 20 runs off the five balls as Chennai lost the match.

“He seems to have a right groin injury, I think, and it was obviously serious enough to keep him off the field,” Fleming told a post-match news conference.

“He’s obviously desperately disappointed that he couldn’t bowl the last over –  that’s what he’s pretty much in the team for. He’ll have to be reassessed going forward, but at this stage you’d imagine it’s going to take a few days or a couple of weeks, but we will assess that tomorrow,” added Fleming.

Bravo is the only player to have picked more than 500 wickets in the T20s. He achieved the feat in the recently concluded Caribbean Premier League (CPL). If Bravo is ruled out for the rest of the tournament it can be a huge blow for Chennai, who will be weakened further.

Meanwhile, the Indian media reported that Chennai are not likely to ask for Bravo’s replacement even if he is ruled out.

Meanwhile, Rajasthan were blown away in the AB de Villiers storm. The former South African batsman smashed a 22-ball 55, as Royal Challengers Bangalore defeated Rajasthan by seven wickets. Rajasthan have lost few very close matches that could have easily gone in their favour. Their marquee player Ben Stokes, who was beside his ailing father in New Zealand, joined them quite late. Even after his arrival, he has not been able to live up to his billing.

Their main problem throughout the tournament has been their batting. They have depth in batting but it never clicked collectively. Stokes was not there, Uthappa had been out of form in the first five games. However, their bowling is quite impressive with the likes of Jofra Archer and Jaydev Unadkat. Stokes was not used in the last match against Bangalore.