Khabib swoops back into UFC Octagon in AD - GulfToday

Khabib swoops back into UFC Octagon in AD 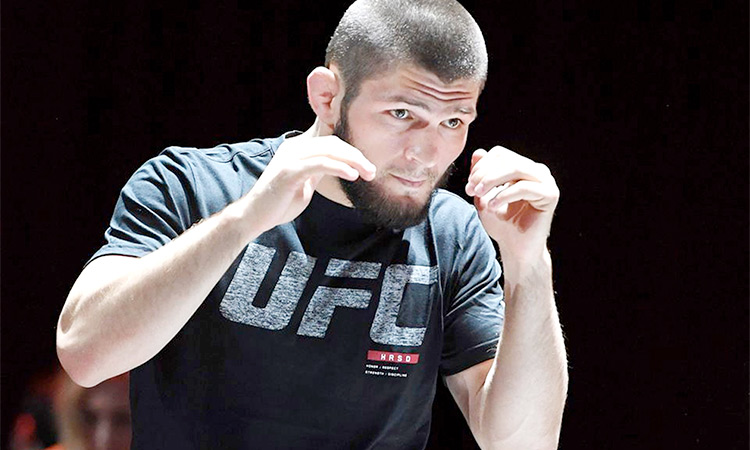 In seven days, Abu Dhabi will welcome the return of crowd favourite Khabib Nurmagomedov to the UFC octagon for the first time since his victory over Dustin Poirier at UFC 242 in the emirate back in September 2019.

Khabib, nicknamed ‘The Eagle’, seek to retain his lightweight title and undefeated status when he faces the lightweight division’s interim champion Justin Gaethje at UFC 254 on Oct.24. The much-anticipated champion vs champion match-up is the main event of UFC 254. It is also final bout of a thrilling 59-fight Return to Fight Island, the five-event mega series currently taking place on Abu Dhabi’s Yas Island.

The Russian fighter produced a dominating display in his last Octagon appearance, defeating American opponent Poirier by submission in round three of their Abu Dhabi Showdown Week main event last year, which was also held on Yas Island. In the coming week Nurmagomedov will be hoping to continue his successful run in Abu Dhabi.

“All the time I come back here to the UAE and fighting in Abu Dhabi. For me, it’s like I’m fighting in my home. I feel great with this. This is an amazing place,” said Khabib previously

However, Gaethje has arrived in Abu Dhabi in great form following his May victory over Tony Ferguson, which saw him named interim champion in Khabib’s Octagon absence due to COVID-19 restrictions.

Return to Fight Island has already recorded a number of milestones and ensured the health and safety of more than 2,500 people housed inside the innovative UFC Fight Island safe zone bubble.

Meanwhile, longtime Khabib training partner Islam Makhachev was supposed to face former lightweight champion Rafael dos Anjos next weekend on the main card of UFC 254. Unfortunately, dos Anjos was pulled from the card after testing positive for COVID-19 and, during the scramble to find a replacement, Khabib suggested that Tony Ferguson should fight with Islam, with his manager Ali Abdelaziz even offering to pay Ferguson $200,000, according to a MMA report.

Ferguson rejected the offer and, unable to find a replacement opponent for Makhachev, the UFC ultimately removed him from the card. But though the chances of a fight next weekend are slim, Khabib has now moved on from Ferguson to targeting another big name: former Bellator champion Michael Chandler.

On his YouTube channel, MMA analyst and former title challenger Chael Sonnen reported that he spoke to Khabib who told him that if Chandler fights Makhachev and wins, then Khabib would view him as the top contender.

“(Khabib) said, ‘Chael, I watch your videos, I need to tell you something. I want to make this very clear,”’ Sonnen recounted. “He said, ‘There’s no one I’m closer to than Islam.’ And he said, ‘I’m telling you right now, if Michael Chandler beats Islam, I will view Michael Chandler (as) the number one contender, and I want you to get the message out.’ I said, ‘OK, Khabib, when I get the message out, I’m gonna say you called me, you told me this.’ He goes, ‘That’s what I’m doing. Get that message out.’”