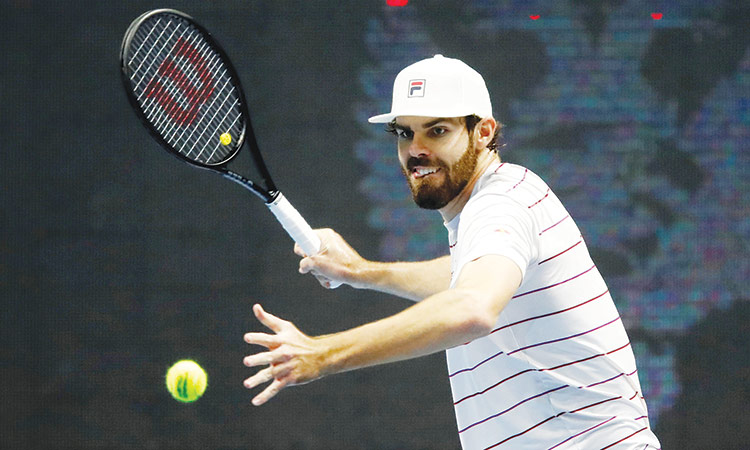 Reilly Opelka returns to Daniil Medvedev (unseen) during their second round match of the St Petersburg Open on Thursday. Reuters

Zverev was playing indoors for the first time this year after a mixed record on indoor hard courts in 2019. He has been strong in those conditions in the past with three career indoor titles, including the 2018 ATP Finals.

Zverev had seven aces and didn’t face a break point against Verdasco. He will next play Lloyd Harris in the quarter-finals. He is looking for his first title of the year and his third in his native Germany following victories at the clay-court Munich tournament in 2017 and 2018.

Roberto Bautista Agut booked his place in the quarter-finals after defeating the experienced Frenchman Gilles Simon 6-4, 7-6 (5). His reward is a match against Hubert Hurkacz.

Third-seeded Felix Auger-Aliassime earned a 6-4, 6-1 win against qualifier Henri Laaksonen. The Canadian next faces Radu Albot of Moldova for a place in the semifinals.

Eighth-seeded Marin Cilic was upset 3-6, 7-6 (3), 6-2 by Spanish player Alejandro Davidovich Fokina, who set up a quarter-final against Austria’s Dennis Novak.

The giant American also saved four break points in the deciding set before going on to complete the biggest win of his career against the world number six.

“It’s always a tough match, playing one of the best players in the world in general, but especially at his home. It’s a great win for me,” said Opelka.

“It was ugly for the first set-and-a-half. I felt like I barely won any points on his serve, but part of that is just because of my opponent... Daniil is an absolute nightmare to play, especially for a guy like me because he just runs every ball down.”

It was Medvedev’s third defeat in four matches having made opening round exits in Hamburg and Roland Garros.

The 33-year-old Querrey left St Petersburg with his wife Abby and nine-month-old son Ford following his removal from the ATP tournament being played in the city after an initial negative test on October 7 was followed by a positive test for him and “his family members” on Oct.11.

Under ATP health protocols, Querrey was told to isolate in his hotel room before plans were made for the family to move to a private apartment in the city.

However, officials claim that attempts to check on the health of Querrey, his wife and baby were thwarted.

“The sportsman never opened the door of his room - neither on October 12, justifying his refusal by the fact that his child was sleeping, nor on October 13, despite prior agreement,” said a statement from the tournament organisers.