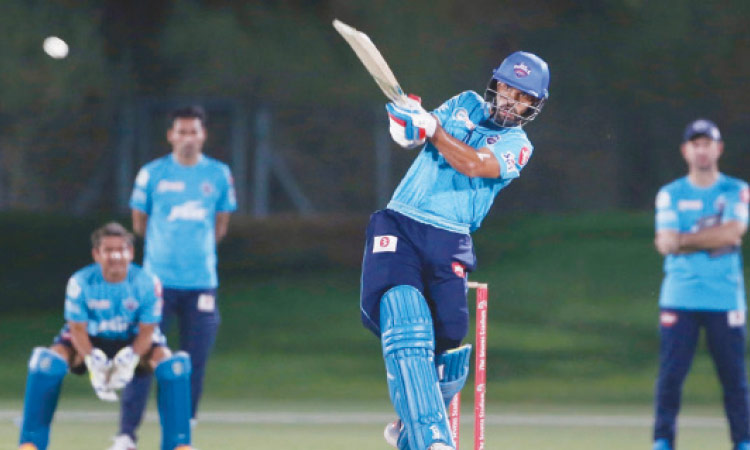 A ruthless Delhi Capitals will look to extend winning momentum when they take on a stuttering Chennai Super Kings (CSK), who are fighting to remain afloat in every match, in the second match of Saturday’s double header in Sharjah.

With a clinical performance, Delhi, who are bidding for their maiden IPL title, have been in top three right from the beginning.

Despite being on the top, Delhi coach Ricky Ponting wants the team to remain focus as things can change quickly in the tournament.

“The things are well under control and look good at the moment but I am not the kind of a person who looks too far.

“We have seen the teams in the past, who have six wins from six games but failed to make it to the play-off later. I want the guys to keep the pressure on. Despite procuring six wins form eight games, I think we have not played best cricket as yet,” said Ponting.

“I have been saying one thing to the boys from the beginning to play our best cricket in the second half of the tournament, not in the first half,” he added.

It is a common place in cricket when a player or a team peaks too early in the initial stages but fizzles later on when it matters the most.

“So we will keep working towards that and strive to be better in every match. We will keep our focus intact and make sure that our planning and preparation is good,” said the former Australian captain.

Delhi’s main strength has been their bowling. The South African pace duo of Kagiso Rabada and Anrich Nortje can rip through any batting line-up on a given day and defend even a paltry total. They are complemented by Axar Patel and Ravichandran Ashwin. In their last match, Nortje stole the show as Delhi did not let Rajasthan Royals to score 39 off 30 balls in the end to eke out an improbable victory.

Meanwhile, Chennai will look remain afloat in the tournament by chalking out another win after their victory over much-fancied Sunrisers Hyderabad.

Chennai are at the sixth spot in eight-team league with just six points. They need to play all their remaining matches like a knock out game to keep their hopes alive.

In the other match of Saturday, a resilient Royal Challengers Bangalore (RCB) have a chance to bounce back with a victory over a lackluster Rajasthan Royals, who are also struggling to keep their hopes alive of reaching the last four.

Both the teams are coming into match on the back of defeats but Bangalore are nicely perched in the top three despite their narrow loss against Kings XI Punjab.

Despite their poor run of form in the tournament, pace spearhead Jofra Archer believes Rajasthan can still make it to the last four.

“I think there are a lot of opportunities. We need to go out there and get those wins. There have quite a few good performances and we need to put up a collective effort and try to turn the table around,” said Archer in a press release posted by the team on their social media accounts.

“We have been such situation before as well and we know how to come out it. So we are not press the panic button,” added English all-rounder.

Jaydev Unadkat, who is Archer’s bowling partner, said: “We have been doing the things in bits and pieces. We need to put up a collective effort. We are lacking in certain departments and will look to improve, where we lack.”

On the other hand, Bangalore are brimming with the confidence with ten points in their kitty. Despite their loss against Punjab, Bangalore’s confidence must be sky high as they made their opponents toil for two runs off the last over and took the game to the last ball of the match.