Ortega, Jung square off in clash of titans - GulfToday

Ortega, Jung square off in clash of titans 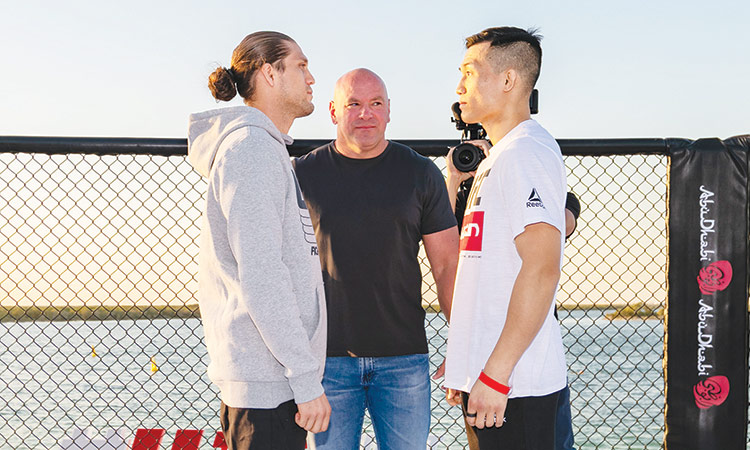 Chan Sung Jung (right) and Brian Ortega face off on Yas Beach ahead of return to their Fight Island Showdown.

ABU DHABI: Brian Ortega and Chan Sung Jung were originally slated to face off last December in Busan, South Korea, but a knee injury to Ortega delayed the clash of featherweight contenders according to UFC.

Now, many months later and with tensions between the two having escalated exponentially, they will finally clash in what could be a bout to determine the next title contender in the 145-pound weight class.

Saturday’s contest will be Ortega’s first appearance since his UFC 231 title fight loss to Max Holloway, where he was outworked and outgunned en route to suffering the first defeat of his career. In addition to taking time to recover from various injuries, Ortega has used this hiatus to completely reshape his team, with Rener Gracie standing as the lone remaining member of his ensemble as he readies to return to the Octagon. ‘The Korean Zombie’ remained in the main event of last year’s fight card in Busan, knocking out Frankie Edgar in just over three minutes for his second consecutive first-round stoppage win.

Now 3-1 with a trio of first-round finishes since returning from his mandatory military service obligations, the 33-year-old veteran has looked lights out during that span, brandishing the same entertaining style as always, while exhibiting greater power and improved technical acumen.

This would be a must-see pairing if Ortega and Jung were congenial acquaintances and there was no backstory to think of between the two, but when you add in the fact that there is some genuine heat between the top-billed tandem, this becomes a “don’t you dare miss it” engagement.

How will Ortega look after nearly two years away and rebuilding his team? Can Jung add a third straight first-round stoppage win to his resume? Will either man deliver the kind of performance that secures them a title shot next time out?

These are just three of the myriad questions that will be answered this weekend when this Fight of the Year contender hits the cage and the strikes start flying.

Crute vs Bukauskas: Promising light heavyweight finishers clash here as Australian Jimmy Crute squares off with Lithuanian sophomore Modestas Bukauskas in what should be a spirited affair for as long as it lasts.

A graduate of the Contender Series, the 24-year-old Crute scored finishes of Paul Craig and Sam Alvey in his first two UFC appearances, was submitted by Misha Cirkunov in his third showing, and rebounded with a first-round submission win over Michal Oleksiejczuk in February.

Two years his opponent’s senior, Bukauskas sports an equally impressive 11-2 record overall and enters on a seven-fight winning streak that includes a stoppage win in his UFC debut in July. ‘The Baltic Gladiator’ has only been the distance once in his career and that was in his first professional appearance, and has only ventured beyond the first round twice during his current run of success.

Just as Crute should be garnering more attention for his exploits in the Octagon heading into this one, Bukauskas is another young, talented addition to the light heavyweight division who fans should be paying close attention to going forward.

It’s a new era in the 205-pound weight class and these two should be a part of its future.

Gane takes on Delija: Heavyweight rising star Ciryl Gane looks to build on his impressive UFC rookie campaign and continue his climb up the rankings as he squares off with talented Croatian newcomer Ante Delija.

The 30-year-old Gane made his pro debut in August 2018 and his UFC debut one year and eight days later, submitting Raphael Pessoa in the first round to push his record to 4-0. He followed that up with a third-round heel hook finish of Don’Tale Mayes in October, then made another quick turnaround to take out Tanner Boser, who has since scored a pair of impressive finishes of his own to establish himself as an emerging name to track in the heavyweight division as well.

Finally set to embark on his third year as a professional mixed martial artist, Gane has all the markings of a breakout candidate and future contender, if not champion, boasting tremendous size and strength, explosive athleticism, and a diverse skill set.

Delija steps i n for Shamil Abdurakhimov riding a three-fight winning streak capped by a second-round stoppage win over veteran Oli Thompson. Sporting one of the best nicknames in the game — ‘Walking Trouble’ — the 30-year-old is 8-1 over his last nine fights, with his only setback coming due to injury in a bout against current UFC competitor Marcin Tybura.