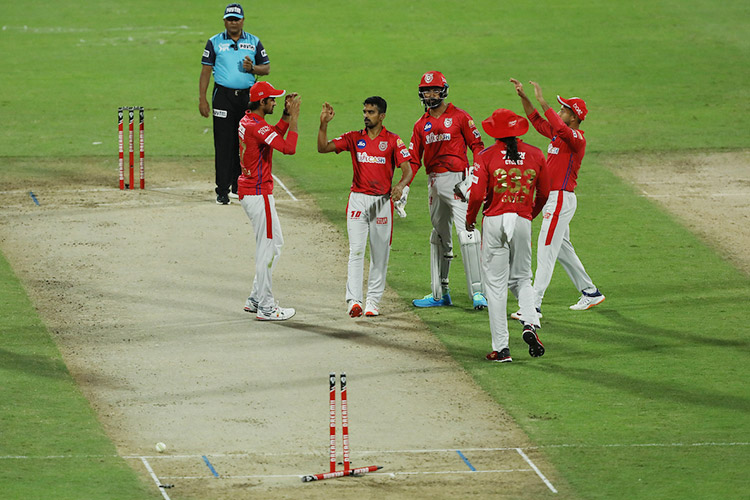 KXIP’s players mark fall of a wicket during their IPL match in Sharjah on Thursday. Courtesy: Twitter

Despite a stupendous show of batting by KL Rahul and Chris Gayle, Kings XI Punjab (KIXP) had to dig deep to eke out a nail-biting eight-wicket victory against Royal Challengers Bangalore (RCB) in their must-win IPL game on Thursday.

Chasing 172 to win, Punjab made heavy work of what should have been a cakewalk after wobbling in the last over to edge past Bangalore off the last ball of the match to end their five-game skid in Sharjah.

Yuzvendar Chahal bowled an eventful last over as Bangalore almost pulled off a heist after the match took a dramatic turn. Punjab were cruising nicely towards the target with both Rahul and Gayle on the crease, having crossed their respective fifties. Punjab needed two runs off the last over with nine wickets in hand.

Chahal bowled two dot balls before Gayle took a single off the third. They needed only a winning run off three remaining deliveries. Chahal delivered another dot to mount the pressure and bring the equation down to one needed off the last two. Rahul tried to steal a cheeky single but an agile Devdutt Padikkal found Gayle short of his ground.

With Rahul at the non-striker’s end, Punjab were under enormous pressure. Nicholas Pooran held his nerve, smashing a six to seal a hard-fought victory for Punjab off the last ball to all but end Bangalore’s hopes of a Super Over.

Earlier, Mayank Agarwal and Rahul shared a 78-run stand for the first wicket to set the tone for a successful chase.

Agarwal was more brutal of the two as he belted a quick-fire 25-ball 45 before Chahal rattled his stumps to give Bangalore their first breakthrough.

After his departure, Gayle joined Rahul as the duo dominated a hapless Punjab attack with a flurry of sixes and boundaries.

Rahul raced to his fourth fifty of the season off 31 balls with a single while Gayle brought up his maiden fifty off 36 deliveries. Rahul’s unbeaten 49-ball 61 was studded with five sixes and a four while Gayle also hit a similar number of boundaries and as many over the fence.

Bangalore were struggling for much of the innings despite getting off to a sound start given by openers Aaron Finch (20) and Padikkal (18), as they kept losing wickets at regular intervals after the opening stand was broken.

AB de Villiers (2) was demoted to No. 7 with Washington Sundar (13) and Shivam Dube (23) being sent ahead of him. De Villiers came in during the 18th over and was dismissed by Mohammed Shami after scoring just two runs off five balls.