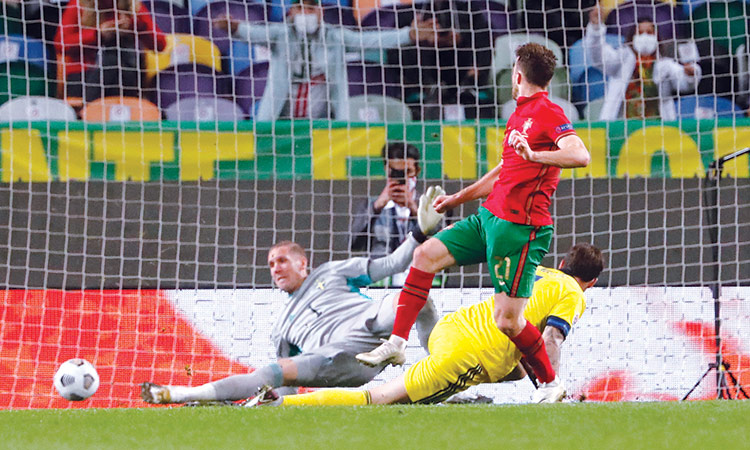 Portugal made light of Cristiano Ronaldo’s absence due to a positive coronavirus test to see off Sweden 3-0 on Wednesday and stay top of their Nations League group.

A Diogo Jota brace and another strike from Bernardo Silva were enough to stay level on 10 points with France and hold onto first place in League A Group 3.

Ronaldo, who was pictured watching the match on television wearing a Portugal top, was forced to leave the national team camp after returning a positive test for Covid-19 on Tuesday.

The Juventus forward returned to Italy on Wednesday to continue his self-isolation.

His Portugal teammates had few problems dealing with Sweden, who have now lost all four of their Nations League matches and are rock bottom of the group.

The Swedes are three points behind Croatia, who were beaten 2-1 by France in Zagreb.

Silva curled home the opener in the 21st minute thanks to unselfish play from Jota, who laid on the Manchester City midfielder instead of going for goal himself in a promising position.

Fellow Premier League star Jota made it two just before the break when, completely unmarked, he chested down Joao Cancelo’s beautifully flighted pass and slotted home.

The new Liverpool signing then put the result beyond any doubt in the 72nd minute with a superb individual goal, weaving in from the left before drilling a low finish past Sweden goalkeeper Robin Olsen.

ENGLAND LOSE, FRANCE WIN: England’s prospects of returning to the finals of the Nations League suffered a big hit as Gareth Southgate’s side lost 1-0 at home to Denmark on Wednesday, while Kylian Mbappe gave World Cup holders France a 2-1 victory in Croatia and Portugal won without Cristiano Ronaldo.

Harry Maguire was sent off for England in the first half at Wembley for two clumsy yellow cards, and Christian Eriksen then converted a 35th-minute penalty on the occasion of his 100th cap to put the Danes ahead.

They held on to inflict a first home defeat on England in two years, with the hosts also having young Chelsea full-back Reece James sent off for dissent after the final whistle.

“He is a top player, he is a massive part of what we do,” Southgate said in defence of Maguire, who has struggled for Manchester United since his involvement in a brawl on the Greek island of Mykonos in August.

“He is having a period where is having a lot of stick thrown his way and he is big enough to deal with that.”

England got to the four-team finals of the inaugural Nations League last year but their chances of getting there again this time are very much in the balance with Belgium two points ahead of Southgate’s team and the Danes atop League A, Group 2.

Belgium won 2-1 in Iceland on Wednesday with Romelu Lukaku scoring twice. They host England in Brussels on Nov.15.

In Zagreb, Paris Saint-Germain star Mbappe missed an open goal early on but got the winner in the 79th minute as France beat Croatia 2-1 in their latest re-run of the 2018 World Cup final.

Antoine Griezmann had put France ahead with Nikola Vlasic equalising in the second half for Croatia before around 7,000 fans.

Les Bleus are level with Portugal on 10 points at the top of League A, Group 3.

Meanwhile, the prolific Robert Lewandowski scored a brace as Poland beat Bosnia and Herzegovina 3-0 in Warsaw. Karol Linetty got the other goal and Poland are top of Group A, a point above Italy and two ahead of the Netherlands.

The Dutch came from behind to draw 1-1 with Italy in Bergamo, with Donny van de Beek netting for Frank de Boer’s side after Lorenzo Pellegrini put Italy ahead.

Below the top tier, Scotland continued their tentative revival by beating the Czech Republic 1-0 at an empty Hampden thanks to an early goal by Newcastle United’s Ryan Fraser.

After edging Israel on penalties to reach the Euro qualifying play-off final, Scotland beat Slovakia 1-0 at the weekend.

They are now unbeaten in eight matches and are four points clear of the Czechs at the top of League B, Group 2, and five ahead of Israel who came from 2-0 down to win 3-2 in Slovakia with a hat-trick from PSV Eindhoven’s Eran Zahavi.

In Group 4, Wales won 1-0 in Bulgaria with a late Jonny Williams goal.

They are unbeaten in eight competitive games, and Ryan Giggs’ side are top with 10 points, a point ahead of Finland.

Stephen Kenny is still waiting for his first win as Republic of Ireland manager after a 1-0 defeat in Finland left his side out of contention for top spot in that group.

Italy’s sports minister Vincenzo Spadafora said on Thursday that Ronaldo may have violated Italian coronavirus measures by travelling to Portugal while Juventus were in isolation, returning to Turin this week after testing positive. 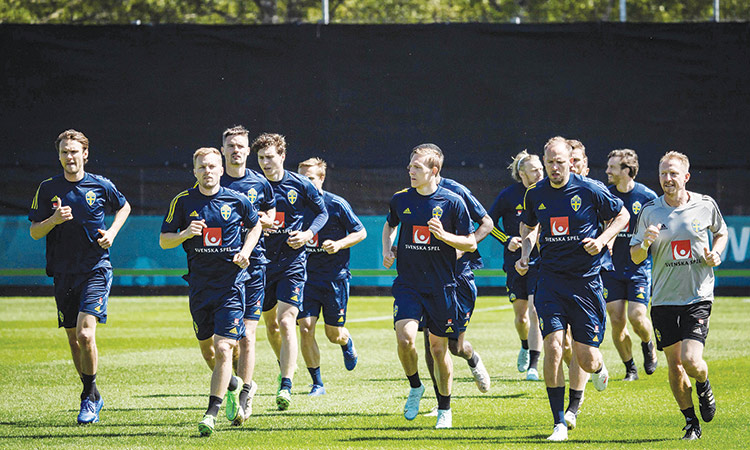 Sweden left Kulusevski, who plays his club football for Juventus, in Stockholm when they travelled to Gothenburg for the final part of their build-up to the tournament. “This morning, Dejan Kulusevski informed the medical team that he had cold symptoms. Dejan was tested immediately