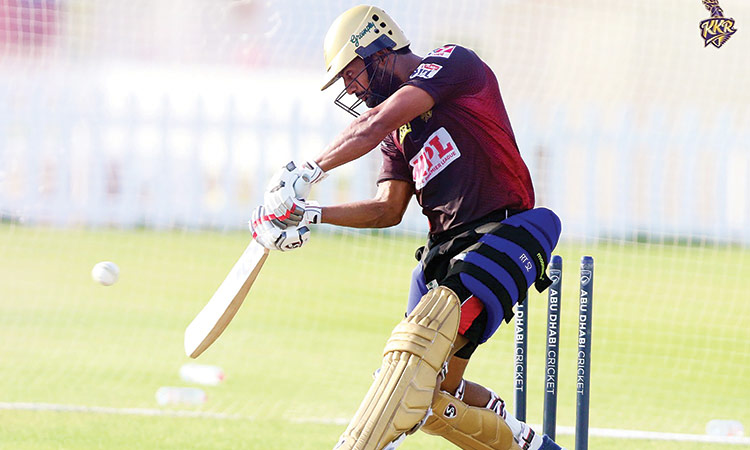 KKR Rahul Tripathi bats in the net during a training session ahead of their IPL match against Mumbai Indians. Courtesy: Twitter

A high-flying Mumbai Indians (MI) will look to emulate their feat against Kolkata Knight Riders (KKR) in the second leg match of the tournament on Friday.

In their first encounter, Mumbai had trounced Kolkata by a huge margin of 49 runs. After captain Rohit Sharma propelled Mumbai to 195/5, the pace trio of Jasprit Bumrah, Trent Boult and Patt Cummins ripped through the fragile batting line-up of Kolkata and restricted them 146/9.

All the three pacers of Mumbai have been instrumental in their winning run at the IPL so far. Bumrah and Boult have picked up 11 wickets each in seven matches so far while Pattinson has nine in his kitty in the same number of matches.

Mumbai bowling coach Shane Bond was full of adulation for all three of them and expressed his delight in working with quickies.

“I am happy and the reason is that these seamers are bowling very beautifully. These bowlers have got a number of different skills. I encourage them to use those skills,” said Bond.

“We have obviously used the bouncer and short ball a lot. We have three bowlers, who bowl at 140km/hr. It is just putting and applying those skills in the right way, the right time.

“I have known Trent for a long time and he is showcasing those skills at the moment. He is so clear. He knows what he wants.

“He is bowling his whole range of different deliveries. So he is keeping the batsmen guessing. He is an accurate bowler, who moves the ball around, which makes him handy,” added the former Kiwi pacer.

“It has been a lot of fun working with James now. With the pace and aggression that he brings, I love all that, his competitiveness is fantastic. To come in and perform the way that he has, it is been massive for us,” explained Bond.

“Always loved working with Bumrah. Six years now in a row. The thing that I like about him is his willingness to improve. He has turned up this series, got another different ball in his armoury.

“I think when you are seeing a player, who is self-motivated and doing things in the background to make himself better then there is no surprise to me that he is one of the best fast bowlers in the world.

“To connect with Trent and to work with someone fresh like James, that is the beauty of coming to IPL. The range of different people you get to work with. And it always fun as a coach when you see people get success,” concluded Bond.

Meanwhile, Mumbai head coach Mahela Jayawardene also expressed satisfaction on the performance of the team. “The start was a little bit wobbly in the first game. I think we have played some good cricket but did not have the clinical instinct to finish it off,” said Mahela.

“Our second match of the tournament against KKR was better and then the third game again. We showed inconsistency in some departments  but it was a great game. From where we came back and forced a super over.”

Mumbai had staged a valiant comeback against Royal Challengers Bangalore (RCB) after Kieron Pollard and Ishan Kishan collected a massive 89 runs in 24 balls to force a Super Over.

“But since then we have been very consistent, trying to improve in all the departments and play some consistent cricket,” he continued.

“You can’t compare after seven matches to be ten points with just two losses and one of them being in the Super Over. So as a coach I am happy but certainly there are areas where we can improve and we will try to improve,” he concluded.

Meanwhile, Kolkata will look to regain the form and bounce back after their loss against Bangalore, where they lost the match by a massive 82 runs.