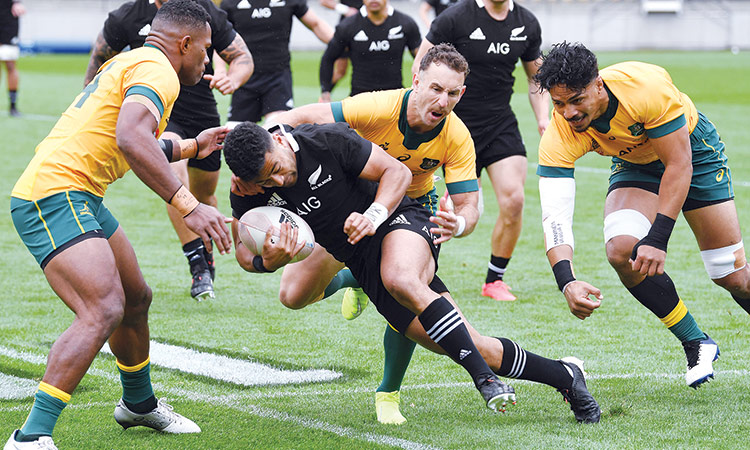 MELBOURNE: A draw against New Zealand is as good as a win for some pundits in Australia who have seized on Wellington as proof the Wallabies are ready to rise up and claim the Bledisloe Cup for the first time in 18 years.

In Dave Rennie’s first match in charge, the Wallabies came within inches of a first victory in New Zealand since 2001 but ended up with a 16-16 draw after Reece Hodge’s late penalty rebounded off the post.

Australia had little to celebrate in their final years under Michael Cheika, slumping to seventh in the world rankings and being punted from the Rugby World Cup quarter-finals in Japan.

So Wellington was enough for Sydney columnist Peter FitzSimons to declare the Wallabies transformed ahead of Sunday’s second test at Eden Park, where they have not won since 1986. “The Wallabies are back. Game on.”

With nearly two decades of failure in the Bledisloe Cup, the annual series contested between the trans-Tasman rivals, Australia has long been weary of the All Blacks’ dominance.

The COVID-19 pandemic has added to frustrations, fuelling disputes between the countries over international scheduling and the future of Super Rugby.

Once led by a New Zealander CEO in Raelene Castle, Rugby Australia (RA) is now helmed by a more assertive leadership who have publicly berated their neighbours for having a “master-slave” approach to their dealings.

The Wallabies went to the Auckland venue last year full of beans after beating the All Blacks 47-26 in Perth when the visitors played with only 14 men in the second half.

The result was a 36-0 shellacking that took the wind out of the Wallabies’ sails in the leadup to the World Cup and saw New Zealand retain the Bledisloe Cup.

Former coach Robbie Deans led the Wallabies to a convincing 34-19 win over New Zealand in Sydney in 2008, which was followed by a 39-10 reverse at Eden Park the following week.

The Wallabies players have avoided talking tough this week and say they expect an All Blacks backlash on Sunday.

Yet it has not been easy to avoid getting caught up in the hype.

“This is only the beginning. There’s a lot more to come,” said flyhalf James O’Connor.