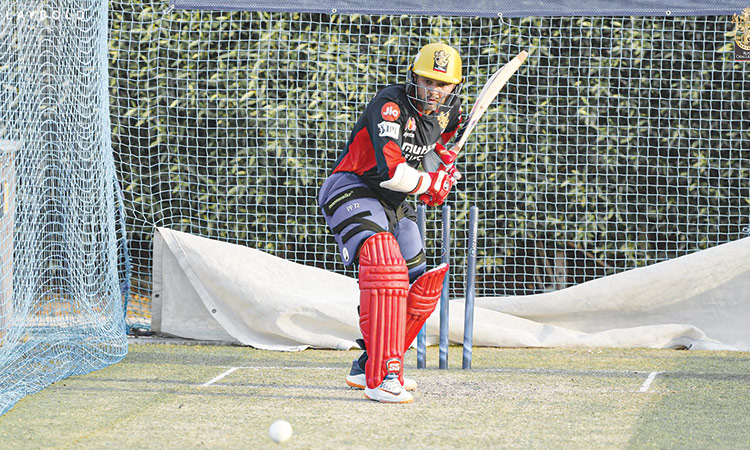 RCB’s Parthiv Patel bats in the nets during a training session. Courtesy: Twitter

A hitherto insipid Kings XI Punjab (KXIP) will be looking for a turnaround in fortunes in their bid to thwart a buoyant Royal Challengers Bangalore (RCB) outfit, who on their part are eyeing the apex perch of the Indian Premier League (IPL) standings, as the two teams lock horns on Thursday.

Bangalore enter the match fresh after a crushing 80-run win over Kolkata, fired by a blitzkrieg of an innings by AB de Villiers, a triumph that took them to third position on the points table with five wins from seven games thus far.

De Villiers’ stupendous effort of 33-ball 73 with the bat -- his third fifty of the season -- propelled Bangalore to a challenging 194/2. Besides the swashbuckling South African star, the Virat Kohli-led team have a star-studded batting line-up that includes the likes of Aaron Finch, Virat Kohli and Devdutt Padikkal.

All their batsmen are presently in great form and have stepped up in each match to bail them out from sometimes tricky situations. Captain Kohli, who off colour in the first three matches, struck form with an unbeaten 73 and followed it up with a score of 90 to become the highest scorer for his team with 256 in seven games so far.

Finch, De Villiers and Padikkal have been in good touch right from the beginning.

In the match against Kolkata, Padikkal and Australian T20 captain Finch gave them a strong platform with a 67-run first-wicket stand before De Villiers lit up the Sharjah Stadium with a barrage of sixes.

Their bowling has been bolstered by the inclusion of right-arm fast bowler Chris Morris, who made an impressive start with five wickets in two matches.

The South African pacer also seems to have solved Bangalore’s death bowling problem, which saw their bowlers leaking too many runs in the last four overs in their earlier matches.

Punjab on the other hand will look to keep their playoff spot hopes alive with a much-needed win on Thursday.

In a big boost to Punjab, their pace spearhead Sheldon Cottrell has made a full recovery from his injury and will be available for selection for the Bangalore game.

Also, their explosive batsman Chris Gayle — who has not played a single match this season — should be available for the RCB game after having been declared fit a couple of days ago.

Cottrell had suffered a groin injury in one of the training sessions last week, and therefore missed KXIP’s last game against KKR.

Fortunately for KL Rahul and the rest of the KXIP management, Cottrell made a swift recovery from his groin injury.

After missing just one game, the muscular left-arm West Indian pacer was seen bowling a bit in the nets at Wednesday evening’s training session.

Cottrell’s return should be a big boost for KXIP, who need to start winning games soon if they are to make the playoffs this season.

The 31-year-old has six wickets so far in his six games for KXIP besides putting in quite an economical effort at the start of each innings for his franchise.

Cottrell dismissed both Padikkal and Kohli when KXIP played RCB in their earlier fixture, a feat that went a long way in helping his side to an emphatic win.

Meanwhile, Gayle’s return should also help the cause of Punjab, who have suffered losses in six out the seven games played, which sees them at rock bottom of the table.

With a fully fit squad at his disposal, coach Anil Kumble and the rest of the KXIP squad would be optimistic of getting a favourable result against the in-form RCB and reigniting their push for a top four finish.