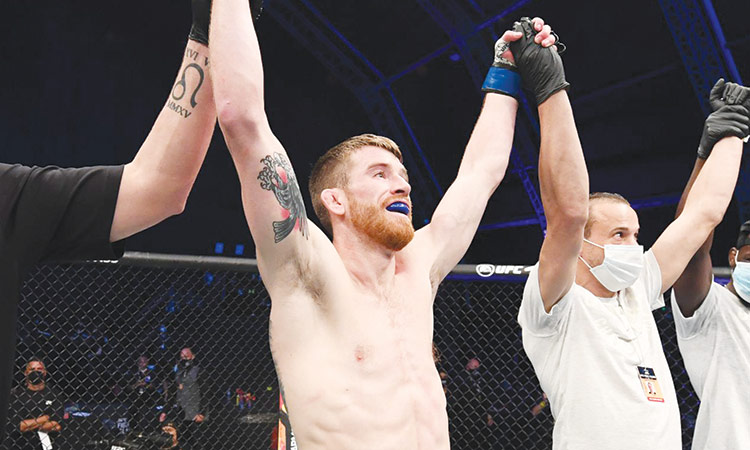 Cory Sandhagen actually needs to gain a doctor’s clearance before competing again after the medical suspensions were handed down from the card in Abu Dhabi. Courtesy: MMA

Cory Sandhagen picked up the biggest win of his career this past Saturday night at UFC Fight Island when he capped off his main event fight against Marlon Moraes with a memorable spinning heel kick in the second round.

The statement victory for Sandhagen came four months after he suffered a first-round submission loss to Aljamain Sterling that knocked him out of title contention. Now with a win over the No. 1-ranked bantamweight contender in the UFC, Sandhagen is certainly back in those championship conversations.

While he was dominant in victory, Sandhagen actually needs to gain doctor’s clearance before competing again after the medical suspensions were handed down from the card in Abu Dhabi.

According to MMA.tv, the official record keepers for the Association of Boxing Commissions, Sandhagen needs to be cleared by an ophthalmologist before he can compete again or he’ll be forced to sit out for six months.

It’s a strange twist considering Sandhagen actually shouted that Moraes had suffered a broken orbital bone during their fight not long before he landed the knockout blow. Now it appears Sandhagen will be the one who might have to wait to compete again.

As for Moraes, he will be forced to sit 45 days with 21 days of no contact after the knockout.

Meanwhile, Contender Series contract winner Impa Kasanganay will also be forced to get clearance from a physician after he fell victim to one of the greatest knockouts in UFC history courtesy of Joaquin Buckley.

The end came after Kasanganay caught his opponent’s ankle but Buckley countered by turning himself around and spinning into a heel kick that produced the jaw-dropping finish. In the aftermath of that fight, Kasanganay will require an ophthalmologist to clear his return to action or he’ll be sidelined for six months.

He faces a minimum 60-day suspension with 45 days no contact after the vicious knockout, according to MMA.

Jimmy Crute has a strong case to say he has earned a number next to his name in the UFC’s light heavyweight rankings, or at least a shot against a top 15 fighter.

Instead, the 24-year-old Australian will fight up and comer Modestas Bukauskas on the undercard at Saturday night’s main event of the Fight Night.

It begs the question: why take on the dangerous, but relatively unknown, Bukauskas?

“It’s definitely more of a risk to reward but, at the same time, Mick (Maynard) the matchmaker has been very good to me and continues to be,” said Crute, ahead of his fight at UFC’s Fight Island.

“It’s hard to get guys to fight me because the position I’m in with Modestas is the position I put the ranked guys in. I should have a number next to my name.”

That said, Crute does not resent the opportunity to test Bukauskas, whose lone UFC fight was a win against Andreas Michalidis in July.