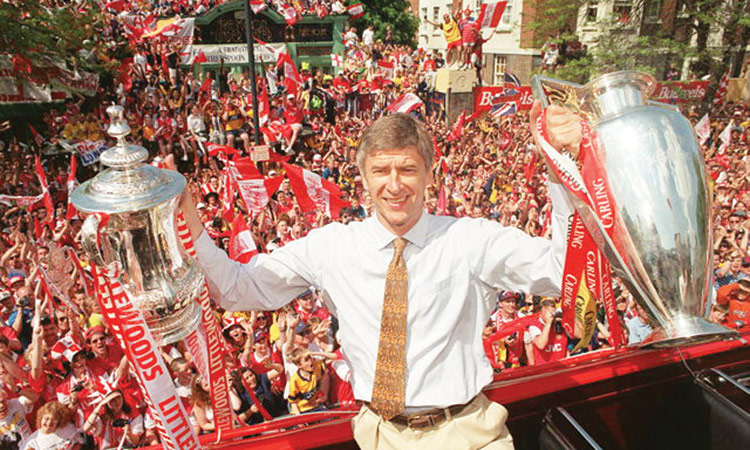 Arsene Wenger celebrates winning the Premier League and FA Cup in his first full season (1997-98) in charge of Arsenal. File

Former Arsenal manager Arsene Wenger has warned that “smaller clubs will die” without urgent action to safeguard the future of the lower leagues as proposals for a major reform of English football have caused division and rancour.

The controversial “Project Big Picture” plan put forward by Liverpool and Manchester United has been branded a power grab for attempting to change voting structures in the Premier League in favour of the “big six” clubs, also including Arsenal, Chelsea, Manchester City and Tottenham.

However, the proposals would provide the English Football League (EFL) with a much-needed injection of £250 million ($325 million) to ease the coronavirus crisis and allocate 25 percent of future broadcasting revenues down through the pyramid.

“If nothing happens, the smaller clubs will die,” Wenger, now FIFA’s chief of global football development, told Sky Sports. “I don’t think that one payment will sort out the problem.

The plan, backed by EFL chairman Rick Parry, does have considerable support in the lower leagues where clubs face going to the wall in the coming months unless there is a bailout.

The 2020/21 season has started behind closed doors and with coronavirus restrictions increasing again in England, there appears little prospect of a return to fans inside stadiums in the coming months.

“If clubs don’t get something soon you will see clubs disappear, I would predict, within 5-6 weeks,” Nigel Travis, chairman of League Two Leyton Orient, told the BBC.

“Before the pandemic, 75 percent of clubs were losing money - that can’t continue. The pandemic has, if you like, exacerbated the problem and we need to get it fixed.

“I know you are talking about ‘Project Big Picture’ - this is a great proposal as far as we are concerned. It is certainly very promising and clubs need it.”

“While Project Big Picture dangles an alleged 250 million pounds ‘rescue fund’ in front of clubs to cover lost revenues during the 2019-20 season they might actually be a sugar coated cyanide pill,” the FSA said in a statement here.

“Apparently ‘money will be advanced to the EFL from increased future revenues’. Is there a guarantee that the money will even materialise? The entire package is based on projected revenues which are, in turn, based on the current media deal.

“Under the proposals top-flight clubs retain eight games per season which they can sell directly via their own platforms, rather than broadcasting in the traditional manner. Would broadcasters pay more money for fewer games?”

The Premier League’s ‘big six’ clubs would also have more power in decision-making and the FSA said a “small handful of billionaire owners” should not be allowed to dictate how English football should be run.

The FSA fear that voting power would help the teams create a closed league in the future which would end promotion and relegation.

“As six clubs can set the rules, who could stop them ending relegation from the Premier League and creating a franchise system like they have in US sports? No one,” the FSA added.

MORE DISQUIET OVER PLAN: The UK government and other Premier League clubs are also among those to voice their disquiet over Project Big Picture.

“It is exactly this type of backroom dealing that undermines trust in football governance,” Prime Minister Boris Johnson’s official spokesman said on Monday.

“In terms of support for EFL clubs, we have been given assurances by both the Premier League and the EFL that they have no intention to let any club go bust due to Covid and we know that they have the means to prevent this from happening within their existing mechanisms.”

West Ham, one of three clubs outside the big six who would be granted special status by the plans due to their longevity in the top-flight, said they were “very much against” it.

Among the controversial proposals, the Premier League would reduce from 20 to 18 teams with only two clubs automatically relegated.

The League Cup and Community Shield would be scrapped, allowing more time in the calendar for lucrative pre-season tours and more European games for the biggest clubs.

“You cannot ignore completely the tradition inside the country,” added Wenger, who was in charge of Arsenal for 22 years between 1996 and 2018.

“Overall the solution has to come from the federation, from the government, from the Premier League - to find a compromise to sort out the problems that already existed before coronavirus.” 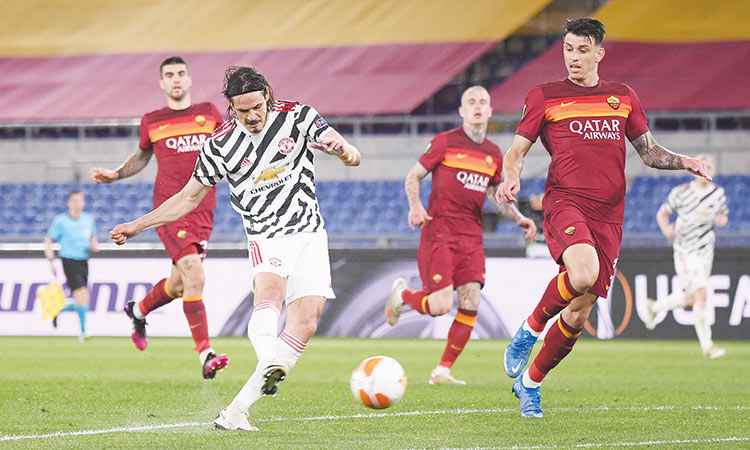 Emery gets Arsenal revenge as Villarreal set up final vs United

Villarreal will face Manchester United in the Europa League final after the Spanish side held out for a 0-0 draw at Arsenal on Thursday to prevent a clean sweep of European finalists for Premier League sides. Pierre-Emerick Aubameyang twice hit the post