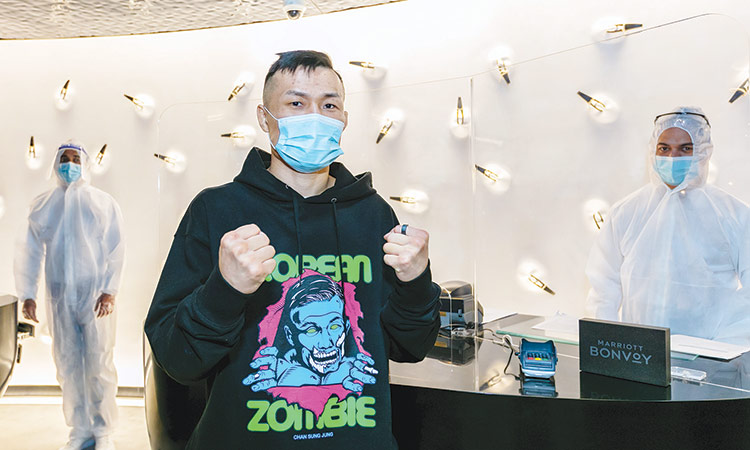 Chan Sung Jung poses for a photograph after arriving at the Fight Island to compete in UFC Fight Night in Abu Dhabi.

Return to Fight Island continues to deliver mega-events on Yas Island, with a highly anticipated bout as No. 2 ranked Brian Ortega takes on No. 4 Chan Sung Jung in a clash of featherweight contenders at Saturday night’s main event of the Fight Night.

The highly anticipated showdown between the two is all kinds of exciting for myriad reasons and carries those ‘could be Fight of the Year, could end with something incredible early’ vibes according to UFC.

Ortega is fighting for the first time in nearly two years after building a new team around himself, while Jung ‘The Korean Zombie’ is, well, “The Korean Zombie” — a 33-year-old bonus machine coming off consecutive first-round stoppage wins over Renato Moicano and Frankie Edgar.

The final bout of the evening is as close to guaranteed excitement as you can get in this sport.

The other things sure of is that there will be more than one breakthrough performance before the main event rolls around because the remainder of this weekend’s card from the Flash Forum in Abu Dhabi is laced with emerging talents primed to make a major impression on the UFC audience.

Gane faces Delija: Gane is one of the best prospects on the UFC roster — a 29-year-old heavyweight with a 6-0 record who has only been fighting professionally in mixed martial arts for a little over two years.

He went 3-0 under the TKO banner, claiming the Montreal-based promotion’s heavyweight title in his rookie campaign, then followed it up with three wins in 19 weeks inside the Octagon, capped by a unanimous decision victory over everyone’s favorite Albertan, Tanner Boser. Now, after dealing with multiple fight cancellations due to a persistent pneumothorax issue that required surgery, “Bon Gamin” is ready to make the first appearance of 2020.

Because he trains under Fernand Lopez at Paris’ MMA Factory, there have been a lot of comparisons between Gane and the gym’s most famous graduate, Francis Ngannou, but they’re actually quite different.

While Ngannou is a freakish combination of size and speed and power who tends to get things done in a hurry, Gane is a more complete fighter that favors technique over brawn, though he too is a physical specimen.

Each of his first two UFC wins came by way of submission, including a third-round heel hook win over Contender Series grad Don’Tale Mayes, which he then followed up with a dominant performance against the now-surging Boser.

Originally scheduled to face Shamil Abdurakhimov, the unbeaten rising star will instead face Croatian newcomer Ante Delija on Saturday in what should be a stern test for the talented French fighter.

The 30-year-old Delija is one of the top heavyweights in Europe and riding a three-fight winning streak since returning to action following a two-and-a-half-year hiatus, with victories over Ricardo Prasel, Carl Seumanutafa, and Oli Thompson. He’s 8-1 over his last nine bouts dating back to the early 2014, with his lone loss coming to divisional stalwart Marcin Tybura, and sports a 17-3 record overall.

Gane looked very good the last time he competed on a card headlined by “The Korean Zombie” and if he turns in a comparable effort this weekend, it wouldn’t be surprising to see him land a Top 10 matchup later in the year or early in 2021.