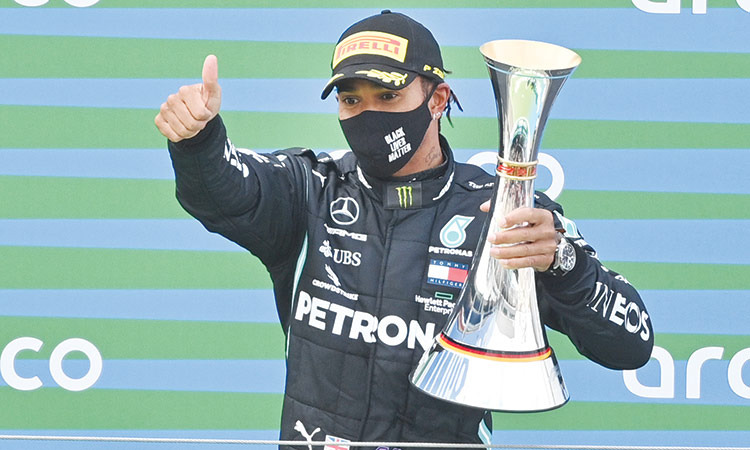 Mercedes driver Lewis Hamilton celebrates with the trophy after winning the Eifel Formula One Grand Prix in Nuerburg on Sunday. Associated Press

Nürburgring: Lewis Hamilton equalled Michael Schumacher’s record of 91 Formula One wins on Sunday when he guided his Mercedes to a narrow, if measured, victory at a frantic Eifel Grand Prix.

“What a result,” he said on the Mercedes team radio after taking the chequered flag clear of Max Verstappen for Red Bull with Renault’s Daniel Ricciardo in third.

Schumacher’s 21-year-old son Mick, a rising star and leader of the F2 series, presented Hamilton with a red helmet from his father’s career collection.

“It’s such an honour,” said a surprised Hamilton as many of the 20,000 fans scattered around the circuit gave the Englishman a standing ovation.

“Thank you, I don’t know what to say.

“When you grow up watching someone that you idolise as a driver, week in and week out, year on year, and to see his dominance, I didn’t imagine that I would ever be here. It’s an incredible honour.”

Bottas’ bad luck handed Hamilton his chance and almost certainly ended his own title bid as the Briton moved 69 points clear in the drivers’ championship.

Ricciardo’s podium success meant that he had won a bet with Renault team boss Cyril Abiteboul, requiring the Frenchman to take a tattoo prescribed by the Australian.

For Hulkenberg, it was a remarkable result coming only 24 hours after he had jumped into the cockpit of Lance Stroll’s car after a late call to action while he was in a cafe in Cologne.

Romain Grosjean, with an injured finger, was ninth for Haas ahead of Antonio Giovinazzi of Alfa Romeo.

It was Mercedes’ first win at the Nurburgring since Juan-Manuel Fangio triumphed at the daunting Nordschleife circuit in 1954.

On a cold and damp afternoon, Hamilton gained the lead into Turn One at the start, but Bottas, from his 14th pole position, switched back to regain the initiative in Turn Two.

By lap five, Bottas led from Hamilton and Verstappen, the leading trio soon 15 seconds ahead of Leclerc’s Ferrari as he battled to resist Ricciardo’s Renault.

On lap 13, Bottas locked up into Turn One and Hamilton pounced to lead. The Finn had to pit and Verstappen began chasing Hamilton who, by lap 15, had a 4.3 seconds advantage. Bottas rejoined fourth behind Ricciardo.

As Bottas exited, F1’s other Finn, Kimi Raikkonen, in a record 323rd race, was handed a 10-second penalty for ramming George Russell’s Williams. 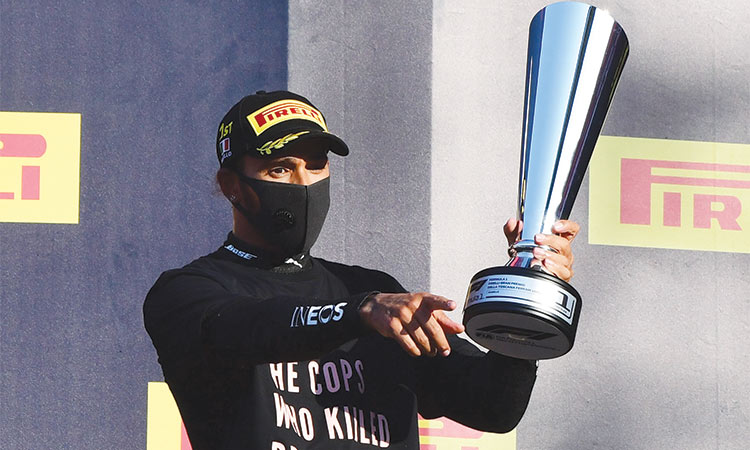