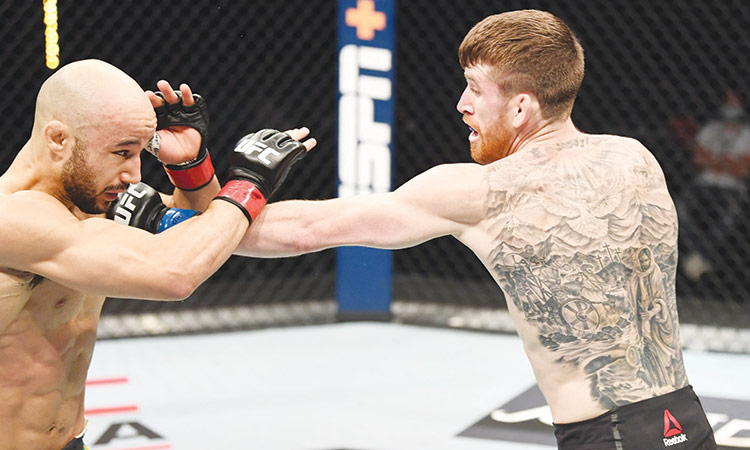 With a superb performance, Cory Sandhagen made his mark on UFC Fight Night with a second-round knockout of Brazilian Marlon Moraes at the Flash Forum in Fight Island in Abu Dhabi on Sunday.

Coming off a devastating loss in his last appearance in June, the top-five ranked bantamweight jumped at the opportunity to face former title contender Moraes at UFC Fight Island 5 and he certainly made the most of the opportunity, according to a MMA report.

On a night filled with spectacular finishes, Joaquin Buckley stood above the rest. To the surprise of nobody, Buckley’s once-in-a-lifetime jumping spin kick KO of Impa Kasanganay earned him one of four $50,000 UFC Fight Island 5 Performance of the Night bonuses.

“I’ve had an excellent experience in Abu Dhabi. Everything has been perfect; we’ve not had to worry about anything so could just focus on the fight. I will always remember this fight and winning in Abu Dhabi,” said Buckley after his impressive display.

“Everything was lined up for this. We’ve just been here working. We have a beautiful place and a beautiful arena for a beautiful knockout,” Buckley added.

The other two Performance of the Night bonuses went to a pair of quick finishes. Heavyweight Chris Daukaus earned his first UFC bonus with a 45-second TKO of Rodrigo Nascimento, and middleweight veteran Tom Breese earned his third UFC bonus by finishing newcomer KB Bhullar 1:42 into round one.

Tagir Ulanbekov marked his promotional debut with a victory at UFC Fight Night and later dedicated the win to Abdulmanap Nurmagomedov, the late father of Khabib Nurmagomedov.

The Russian defeated Brazil’s Bruno Silva by unanimous decision in the flyweight bout at Flash Forum. A team-mate of lightweight champion Khabib, and one of the many fighters trained by Abdulmanap Nurmagomedov, Ulanbekov paid tribute to his former coach immediately after the win.

Following a strong opening round, Sandhagen uncorked a devastating spinning heel kick that bounced off Moraes’ head and sent him crashing to the canvas. Sandhagen followed with a few more punches but Moraes was obviously dazed and confused as the referee rushed into to stop the fight.

The official stoppage came at 1:03 into the second round. “That’s putting in that hard work during that quarantine,” Sandhagen said about his spectacular knockout. “I added that into my game during a weird time. Always working. Hard work pays off.” It was a match of power against volume in the early going with Moraes looking for a knockout with every single shot he threw while Sandhagen mixed together a variety of strikes as he looked to chip away at the Brazilian. While Moraes was constantly seeking an overhand right that always seemed to be just an inch or two away from landing, Sandhagen was countering with leg kicks, shots the body and then coming back up top to the head, the MMA report added.

The diverse selection of strikes from Sandhagen forced Moraes to continue guessing at what was coming next, which seemingly set up the finish.

After cracking Moraes with a shot to the face, Sandhagen shouted that his opponent suffered a broken orbital bone. According to Sandhagen, he recognized the injury right away, which is why he called it out during the fight.

“I seen that it was broken and just to mess with him a little bit, I said something. I think it got in his head a little,” Sandhagen said.

Edson Barboza finally has his first win at featherweight. The veteran Brazilian came away on the wrong end of a split decision in his 145-pound debut so he had something to prove while facing Makwan Amirkhani in the UFC Fight Island 5 co-main event. Looking better than ever on the feet, Barboza blasted Amirkhani with a variety of strikes while scoring several knockdowns before earning a unanimous decision on the scorecards.