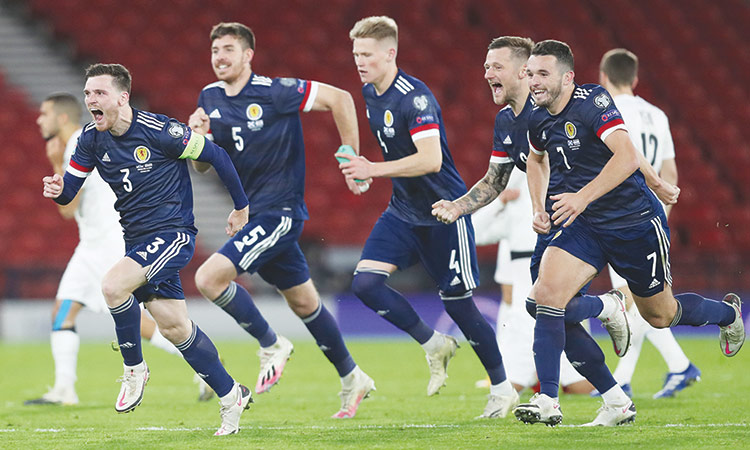 Scotland’s players celebrate after Kenny McLean scores their fifth penalty to win the tie-breaker against Israel during their Euro 2020 playoff semi-final match on Thursday. Agence France-Presse

Scotland won their first ever penalty shootout to beat Israel in the Euro 2020 semi-final playoffs, but there was spot-kick heartbreak for the Republic of Ireland as they lost out to Slovakia.

Northern Ireland will host the Slovaks next month for a place at the postponed tournament next summer after they too prevailed on penalties after a 1-1 draw against Bosnia and Herzegovina.

Scotland are now one game away from their first major tournament in 22 years when they travel to Serbia on Nov.12, but were pushed all the way after neither side could find the net in 120 minutes at Hampden.

“It its another step forward to hopefully making a bit of history for the country,” said Scotland boss Steve Clarke. “Qualification is still in our hands. We know we’ve got a tough game but it is one that we’ll look forward to.

“I can feel there is something building. It’s another game unbeaten and you can feel the elation in the dressing room.”

Clarke’s preparations were thrown into chaos on Wednesday when three key players were ruled out.

Stuart Armstrong tested positive for coronavirus, while Kieran Tierney and Ryan Christie were forced into self-isolation for being in close contact with the Southampton midfielder.

The goal-threat and creativity offered by Armstrong and Christie was badly missed as Scotland laboured to breakdown an Israeli side that has won just one of their last 10 internationals, including a 1-1 draw when they visited Hampden in the Nations League last month.

Manchester United’s Scott McTominay spurned the best chance of the game when he headed wide when completely unmarked from a corner just before half-time and Liam Cooper’s header hit the post with the last action of extra-time. However, McTominay redeemed himself in the shootout as all five of Scotland’s penalty takers found the net, while David Marshall saved from Eran Zahavi.

“Saving the first penalty breaks them a bit and gave us confidence,” said Marshall.

“The last four penalties from us were a real high standard - the lads have practiced every day. It’s more relief than anything.”

Serbia stand between Scotland and a place at the Euros after Sergej Milinkovic-Savic upstaged Norway’s Erling Haaland by scoring twice in a 2-1 victory for the visitors in Oslo. The Lazio midfielder’s first effort was cancelled out by Mathias Normann two minutes from time to send the game to extra-time. But Milinkovic-Savic’s incredibly deft chip from a narrow angle proved a worthy winner.

Ireland failed to capitalise on Slovakia’s own problems with coronavirus absentees as Stephen Kenny’s men were left to rue a host of huge chances after a 0-0 draw in Bratislava.

Allan Browne and Tottenham’s Matt Doherty then failed to score from the spot and the Slovaks made no mistakes to win 4-2 in the shootout.

“It’s a hard one to take at the minute and it is heartbreaking,” said Ireland captain Shane Duffy.

Northern Ireland upset the odds by coming from behind to beat Bosnia.

Rade Krunic opened the scoring early on for the hosts, but Niall McGinn’s equaliser gave Ian Baraclough’s men something to hold on to.

And they kept their heads to win the shootout 4-3 as Haris Hajradinovic and Edin Visca missed for Bosnia.

“We didn’t start anywhere near the way we wanted to, but when we got to grips with it and everything fell into place,” said Northern Ireland captain Steven Davis, who became his country’s most-capped player on his 120th appearance.

Gylfi Sigurdsson’s double ensured Iceland beat Romania 2-1 to set up a final against Hungary, who were 3-1 winners in Bulgaria.

Kosovo’s dreams of reaching a first ever major tournament came to end as they were beaten 2-1 by North Macedonia.

Only admitted into UEFA in 2016, Kosovan hopes were high of making history after they performed strongly in a qualifying group containing England and the Czech Republic.

But instead it is the Macedonians who have the chance to reach a first major international tournament when they face Georgia, who beat Belarus 1-0, in the Path D final next month. 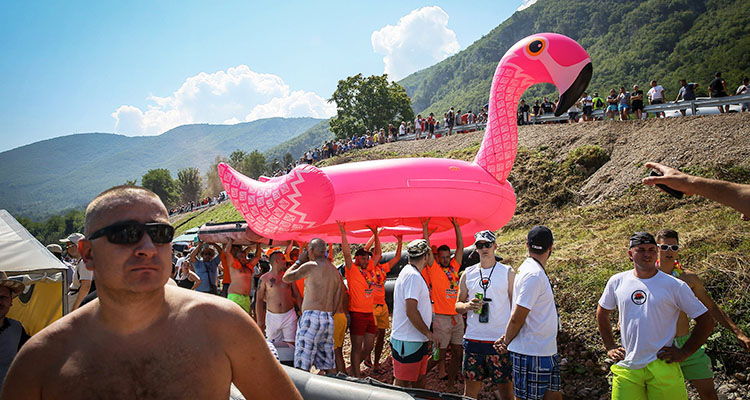