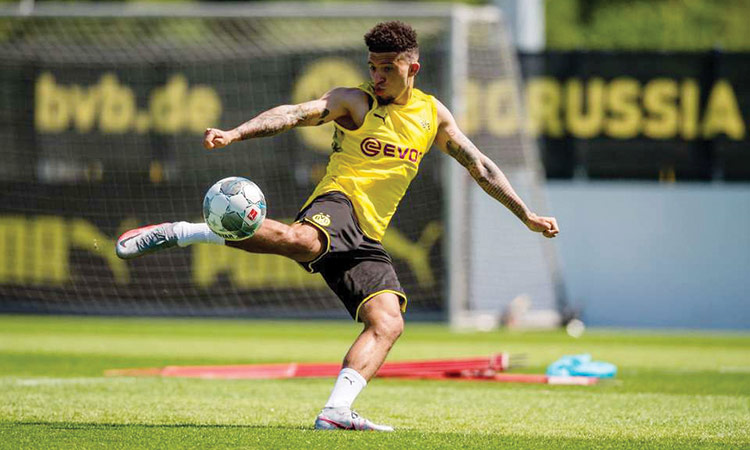 The success of Jadon Sancho’s move from Manchester City to Borussia Dortmund three years ago has encouraged many more to follow the England international’s lead. File / Agence France-Presse

The UK government is pressuring the Premier League to come up with a rescue package for EFL clubs struggling for survival amid the coronavirus pandemic, which has deprived them of matchday income.

The Premier League is in talks with the EFL over a bailout and it is understood they are looking for assurances over how the money is spent, with clubs in the second-tier Championship spending 107 per cent of revenue on wages in the 2018-19 season.

“One of the challenges is the EFL (is) a business that is not sustainable enough,” Soriano said at LeadersWeek.direct.

Salary caps have already been introduced to curb spending in League One and Two.

But Soriano suggested following the Spanish model of having B teams in the lower leagues to aid the development of players and halt the number of young English players moving to Germany for more first-team opportunities.

The success of Jadon Sancho’s move from City to Borussia Dortmund three years ago has encouraged many more to follow the England international’s lead, who the German giants now value at 120 million euros (£109 million, $141 million)

“There are other problems, the challenges of developing players in England where B teams are not allowed,” added Soriano.

“We have a development gap of boys that are 17 or 18, they don’t find the right place to develop and for example they are taken from us by the German teams who try to sell them back to us for a price which is 10 times what they paid.

“This is mad, right? This is something we needed to solve and now maybe the crisis will give us the opportunity and will nudge us to get together and solve these issues.”

City were among those splashing out with around £120 million worth of arrivals in Ruben Dias, Nathan Ake and Ferran Torres.

However, Soriano defended the spending of the English top-flight as necessary to ensure revenues return to pre-pandemic levels in the future.

“We believe that revenues will come back. The team is the engine of our business - if we don’t play good football, we have no business. We can’t negate that, we can’t avoid that.”